Suspect is ‘sorry’ for killing 2 girls while fleeing cops 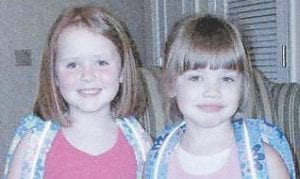 YOUNG VICTIMS — Claudia Faye Wadlington, 5, left, and her best friend, 4-year-old Riley Jane Lawrence, shown here in a family photo, were killed by a hit-and-run driver in Louisville late last Friday afternoon as they tried to cross a street. (Photo courtesy The Courier-Journal)

A motorist accused of the hitand run killing of two young girls while fleeing a police traffic had been arrested 16 times since 2001 and will remain jailed on a $250,000 bond, a judge said Monday.

Kenielle D. Finch, 26, is accused of hitting the girls, ages 4 and 5, with his car while trying to elude a police traffic stop near the University of Louisville on July 25. He has been charged with two counts of murder, aggravated assault, and fleeing and evading police.

Finch requested a public defender at this week’s arraignment, but did not speak further.

Police said Finch was speeding away from an officer when he struck 5-year-old Claudia Faye Wadlington and her friend, 4-year-old Riley Jane Lawrence, as they crossed a street last Friday with Claudia’s mother, Angie Wadlington. Finch had been stopped for a suspected traffic violation before he sped away, prompting the chase.

Finch’s car was found abandoned two blocks from where the girls were hit. Police arrested him later the same day.

Claudia died at the scene. Riley was pronounced dead at Kosair Children’s Hospital in Louisville.

Claudia’s mother, Angie Wadlington, also was struck while walking with the girls. She had a broken arm and a leg injury and was released from a hospital over the weekend.

“He didn’t mean to do it. He’s really sorry,” Pennington said he told a relative.

Court records show that Finch has been arrested since 2001 on more than 70 charges, ranging from possession of marijuana and cocaine to carrying a concealed weapon to resisting arrest. He was sentenced to prison time twice on drug charges and had outstanding warrants when he was arrested, authorities said.

“He was just in the wrong place at the wrong time,” she said. “I’m upset. I’m very upset.”

The deaths prompted visitors to leave a makeshift memorial of flowers and stuffed animals at the intersection where the girls were struck. A funeral for the two girls was held Tuesday in Louisville.

The accident ended a “summer of summers” for the two girls.

“They were living large,” Vickerstaff said. “They were a joy. They lit up rooms.”

After the crash, Louisville Metro Police moved Wadlington to the curb, where she looked up to see “the police cover up Claudia as she lay in the street,” her mother, Jackie Lipham, said.

“That is a memory she will have to live with for the rest of her life, to see her daughter covered up,” she said.

The accident started with a routine traffic stop.

Before the crash, Officer Darrell Hyche pulled Finch over for cutting off another driver in traffic at Floyd and Central Avenue, police spokeswoman Alicia Smiley said.

When Hyche approached the blue sedan on foot, Finch drove away, Smiley said.

Hyche radioed for backup, Smiley said. Meanwhile, the 1993 Grand Am drove five blocks north on Floyd Street to where Wadlington and the girls were crossing with the light at Warnock Street.

The car was abandoned two blocks away and Finch fled onto the campus of the University of Louisville.