Police are searching for a stolen Jenkins police car, last known heading north on U.S. 23 after a prisoner commandeered the car as officers investigated a small explosive found in his pickup truck during a traffic stop.

The chase began about 4:45 p.m. at the Jenkins DoubleKwik. Police had made a traffic stop on a black Chevrolet pickup truck and discovered a “hazardous device,” which sources identified as a grenade or possibly a dummy grenade.

Officers detained the driver of the truck, Steven Tackett of Brushy Fork, and had him in the back seat of a police car. Officers were moving him from one police cruiser to another when he got away and jumped into the driver’s seat of a Jenkins Police cruiser and drove away. Tackett pulled out of DoubleKwik on KY 805 and hit U.S. 23 north toward Pikeville with Kentucky State Police, Jenkins Police and Neon Police in pursuit. The Letcher County Sheriff’s Office also responded to the scene and identified Tackett on its Facebook page as the fugitive.

Kentucky State Police Trooper Matt Gayheart, spokesman for Post 13 in Hazard urged residents to report any sighting of the cruiser or Tackett, but warned not to approach ir confront him. The suspect is armed with weapons that were already in the cruiser.

Tackett is described as a white male with a gray and brown beard. He was wearing blue jeans, a ball cap, and was shirtless when he was last seen.

The police car is a late model, black-and-white Dodge Charger Pursuit with Jenkins Police in the white area on the side of the car. The number 207 is on the bumper.

Several gas pumps at the station were roped off with the pickup truck parked inside the police line. Police say there was no imminent danger of an explosion.

Anyone with information about Tackett’s whereabouts or the whereabouts of the police car are asked to call the Kentucky State Police at (606) 435-6070.

We will have more information as it becomes available. 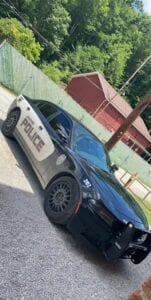 Police are in pursuit of this stolen cruiser on US 23. 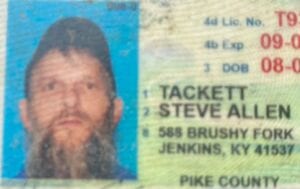 Sources say suspect had a hand grenade in his pickup truck.[/caption]