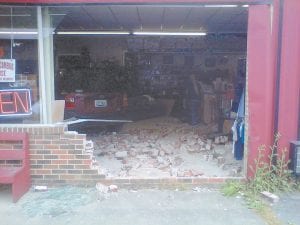 A Kia Sportage sport utility vehicle crashed through the storefront of the Isom Vendors Mall Friday afternoon. Police say the accelerator became stuck. No one was seriously injured in the accident, which police said “could have been ten times’ worse.” (Photo by Crystal Davis)

No one was injured after a Pikeville woman drove her sport utility vehicle through an Isom storefront late last week.

The Kia Sportage drove through a glass window and a brick wall. Davis said the vehicle stopped near a counter where a cash register was located and a door where two customers were shopping.

Davis said the driver walked away with only a small scratch on her hand.

“I don’t know how they didn’t deploy given she went through a brick wall,” said Davis.