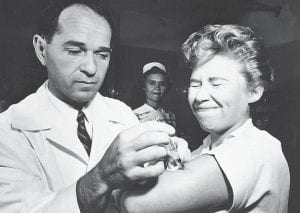 This Aug. 16, 1957 photo shows Dr. Joseph Ballinger giving Marjorie Hill, a nurse at Montefiore Hospital in New York, the first Asian flu vaccine shot to be administered in New York. U.S. health officials say swine flu could strike up to 40 percent of Americans over the next two years and as many as several hundred thousand could die if a vaccine campaign and other measures aren’t successful. The infection estimates are based on a flu pandemic from 1957, which killed nearly 70,000 in the United States but was not as severe as the infamous Spanish flu pandemic of 1918-19. (AP Photo)

In a disturbing new projection, health officials say up to 40 percent of Americans could get swine flu this year and next and several hundred thousand could die without a successful vaccine campaign and other measures.

The estimates by the Centers for Disease Control and Prevention are roughly twice the number of those who catch flu in a normal season and add greater weight to hurried efforts to get a new vaccine ready for the fall flu season.

Swine flu has already hit the United States harder than any other country, but it has struck something of a glancing blow that’s more surprising than devastating. The virus has killed about 300 Americans and experts believe it has sickened more than 1 million, comparable to a seasonal flu with the weird ability to keep spreading in the summer.

Health officials say flu cases may explode in the fall, when schools open and become germ factories, and the new estimates dramatize the need to have vaccines and other measures in place.

A world health official said the first vaccines are expected in September and October. The United States expects to begin testing on some volunteers in August, with 160 million doses ready in October.

The CDC came up with the new projections for the virus’ spread last month, but it was first disclosed in an interview last week with The Associated Press.

The estimates are based on a flu pandemic from 1957, which killed nearly 70,000 in the United States but was not as severe as the infamous Spanish flu pandemic of 1918-19. The number of deaths and illnesses from the new swine flu virus would drop if the pandemic peters out or if efforts to slow its spread are successful, said CDC spokesman Tom Skinner.

“Hopefully, mitigation efforts will have a big impact on future cases,” he said. Besides pushing flu shots, health officials might urge measures such as avoiding crowded places, handwashing, cough covering and timely use of medicines like Tamiflu.

Because so many more people are expected to catch the new flu, the number of deaths over two years could range from 90,000 to several hundred thousand, the CDC calculated. Again, that is if a new vaccine and other efforts fail.

In a normal flu season, about 36,000 people die from flu and its complications, according to the American Medical Association. That too is an estimate, because death certificates don’t typically list flu as a cause of death. Instead, they attribute a fatality to pneumonia or other complications.

Influenza is notoriously hard to predict, and some experts have shied away from a forecast. At a CDC swine flu briefing July 24, one official declined to answer repeated questions about her agency’s own estimate.

“I don’t think that influenza and its behavior in the population lends itself very well to these kinds of models,” said the official, Dr. Anne Schuchat, who oversees the CDC’s flu vaccination programs.

The World Health Organization says as many as 2 billion people could become infected in the next two years — nearly a third of the world population. The estimates look at potential impacts in a two-year period because past flu pandemics have occurred in waves over more than one year.

Swine flu has been an escalating concern in Britain and some other European nations, where the virus’ late arrival has grabbed attention and some officials at times have sounded alarmed.

The WHO’s flu chief told the AP the global epidemic is still in its early stages.

“Even if we have hundreds of thousands of cases or a few millions of cases … we’re relatively early in the pandemic,” Keiji Fukuda said at WHO headquarters in Geneva.

The first vaccines are expected in September and October, Fukuda said. Other vaccines won’t be ready until well into the flu season when a further dramatic rise in swine flu cases is expected.

First identified in April, swine flu has likely infected more than 1 million Americans, the CDC believes, with many of those suffering mild cases never reported. There have been 302 deaths and nearly 44,000 laboratoryidentified cases, according to numbers released July 24.

Because the swine flu virus is new, most people haven’t developed an immunity to it. So far, most of those who have died from it in the United States have had other health problems, such as asthma.