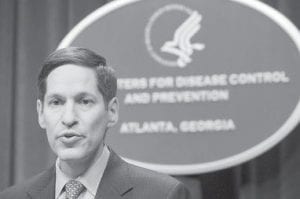 Dr. Thomas R. Frieden, director of the Centers for Disease Control and Prevention, gave a H1N1 Swine Flu update at the agency’s headquarters in Atlanta last week. About one in 13 U.S. swine flu deaths have been children and most of the kids have been of school age, the CDC said in its first study of the new flu’s youngest victims. (AP Photo/Erik S. Lesser)

The first detailed study of U.S. children killed by swine flu found the outbreak differs from ordinary flu in at least one puzzling respect: It appears to be taking a higher toll on school-age youngsters than on babies and toddlers.

At least 40 children have died, accounting for about one in 13 U.S. swine flu deaths, scientists with the Centers for Disease Control and Prevention said. Two-thirds of those already had high-risk health problems, confirming what officials have been saying about who is most vulnerable to swine flu.

It is not clear whether the new virus is more dangerous than ordinary seasonal flu for kids, though some health officials suspect it is. But the analysis shows some preliminary and important differences:

— Normally, half or more of the children who die of the flu are 4 and under. But more than 80 percent of the kids who died with swine flu were 5 through 17. Dr. Beth Bell, a CDC epidemiologist, said that may be because older children spend time at school and summer camp, exposed to more people than younger children kept at home.

— Other germs, working with swine flu in a one-two punch, were a big danger. A bacterial infection on top of the flu virus played a role in most of the deaths of otherwise healthy children.

Swine flu was first identified in April and is now responsible for almost all flu cases in the United States. It has caused more than 1 million illnesses so far, though most were mild and not reported, the CDC estimates. More than 550 lab-confirmed deaths and 8,800 hospitalizations have been reported.

Those statistics don’t mean the new flu is worse than seasonal flu, which is particularly lethal to the elderly and plays a role in an estimated 36,000 deaths each year, the CDC says.

But swine flu is causing more suffering in children and young adults than is customary, and a lot of parents are worried. Some emergency room doctors say they are seeing a lot of mildly ill children brought in by parents fearful that it is a swine flu case that will turn worse.

However, there are no signs that the virus is mutating to become more deadly, as some scientists feared, CDC Director Thomas Frieden said.

Each year 50 to 100 American children die of seasonal flu. But it’s hard to say whether children account for a higher proportion of deaths from swine flu than they do from seasonal flu. The CDC doesn’t monitor seasonal flu deaths as closely as it does swine flu, and has no comprehensive count of each year’s flu deaths to enable such a comparison.

The new report focuses on 477 lab-confirmed swine flu deaths reported through Aug. 8. Thirty-six during that period were children.

Only about 20 percent of those children were 4 or younger. That’s unusual. Often, 50 percent or more of seasonal flu deaths are babies or toddlers, who have less mature immune systems and smaller airways, putting them in more danger from respiratory infections.

Two-thirds of the children who died had high-risk medical conditions. Nearly all of them had an illness related to the nervous system, including mental retardation, cerebral palsy, epilepsy and other seizure disorders.

Years ago experts recognized that children with neurodevelopmental conditions run a higher risk of serious complications from the flu. But the proportion of swine flu victims with that kind of underlying condition is high compared to a previous flu season, CDC officials said.