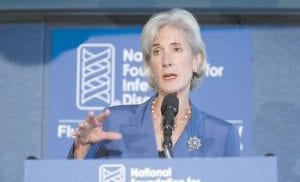 Health and Human Services Secretary Kathleen Sebelius gestured during a briefing about the upcoming seasonal flu season at the National Press Club in Washington. (AP Photo)

The nation’s first round of swine flu shots could begin sooner than expected, with some vaccine available as early as the first week of October, Health and Human Services Secretary Kathleen Sebelius said this week.

Sebelius said she is confident the vaccine will be available early enough to beat the peak of the expected flu season this fall and that early doses are intended for health care workers and other high-priority groups.

“We’re on track to have an ample supply rolling by the middle of October. But we may have some early vaccine as early as the first full week in October. We’ll get the vaccine out the door as fast as it rolls off the production line,” she said.

The possibility of early shots follows encouraging news from last week about the swine flu vaccine. Researchers have discovered that one dose instead of two could be enough for healthy adults, and protection could begin once vaccinated within 10 days instead of three weeks.

“That’s great, which means we’ll have a lot more vaccine,” she said. “We also have seen a robust immune response within 10 days, instead of three weeks as was feared.”

Sebelius said the vaccine doses will be distributed immediately to designated locations across the country once they are available.

“Every state has a plan saying these are the sites to get the vaccine as quickly as possible into people’s arms. That’s where the distribution will go,” she said.

“So, the first week in October, we expect some of the vaccine to begin to roll, and by mid-October, to have the kind of supplies we were talking about. But we may have some available earlier. And we’ll get it out to states as fast as it comes off the production lines,” Sebelius said.

One dose means tight supplies of H1N1 vaccine won’t be stretched so badly. Had it taken twice that dose, or two shots apiece, half as many people could have received the vaccine.

In addition to concerns about swine flu, doctors also expect some garden-variety flu this fall as well, an illness that typically kills 36,000 Americans and hospitalizes 200,000 each year.