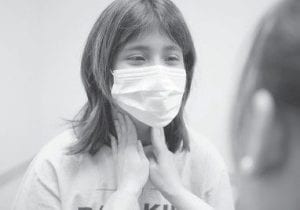 Doctors examined a Chicago girl for symptoms of the swine flu virus at Alivio Medical Center in Chicago. (AP Photo)

So get ready. With flu’s favorite chilly weather fast approaching, we’re going to be a sick nation this fall. The big unknown is how sick. One in five people infected or a worst case — half the population? The usual 36,000 deaths from flu or tens of thousands more?

The World Health Organization predicts that within two years, nearly one-third of the world’s population will have caught it.

“What we know is, it’s brand new and no one really has an immunity to this disease,” Health and Human Services Secretary Kathleen Sebelius says.

A lot depends on whether the swine flu that simmered all summer erupts immediately as students crowd back into schools and colleges, or whether it holds off until millions of vaccine doses start arriving in mid-October.

Only now have U.S. researchers been able to start blood tests to answer a critical question: How many doses of swine flu vaccine does it take to protect? The answer will determine whether many people need to line up for two flu shots — one against swine flu and one against the regular flu — or three.

The hopeful news is that even with no vaccine, winter is ending in the Southern Hemisphere without as much havoc as doctors had feared. It was a heavy season that started early, but it was not an overwhelming one.

The strain that doctors call the 2009 H1N1 flu isn’t any deadlier than typical winter flu so far. Most people recover without treatment; many become only mildly ill.

Careful genetic tracking shows no sign yet that the virus is mutating into a harsher strain.

We’re used to regular flu that kills mostly grandparents. But the real shock of swine flu is that infections are 20 times more common in the 5- to 24-year-old age group than in people over 65.

That older generation appears to have some resistance, probably because of exposure decades ago to viruses similar to the new one.

Worldwide, swine flu is killing mostly people in their 20s, 30s and 40s, ages when influenza usually is shrugged off as a nuisance.

Especially at risk are pregnant women. So are people with chronic conditions such as asthma, diabetes, heart disease and neuromuscular diseases including muscular dystrophy. Some countries report more deaths among the obese.

Still, some of the people who’ve died didn’t have obvious health risks.

“People who argue we’re seeing the same death rates miss the point — they’re in young adults. To me, that shouldn’t happen,” said one infectious disease specialist, Dr. Richard P. Wenzel of Virginia Commonwealth University. He spent the past few months visiting South American hospitals to help gauge what the Northern Hemisphere is about to face.

Children, however, are the flu’s prime spreaders.

Already, elementary schools and colleges are reporting small clusters of sick students. For parents, the big fear is how many children will die.

Panicked crowds flooded India’s hospitals in August after a 14-year-old girl became that country’s first death. In the U.S., regular flu kills 80 to 100 children every winter. The Centers for Disease Control and Prevention has reports of about three dozen child deaths from swine flu.

Even if the risk of death is no higher than in a normal year, the sheer volume of ill youngsters means “a greater than expected number of deaths in children is likely,” said Dr. Anne Schuchat, director of the CDC’s National Center for Immunization and Respiratory Diseases. “As a society, that’s something that’s much harder for us.”

Swine flu quietly sickened hundreds in Mexico before U.S. researchers stumbled across two children in San Diego who had the same mystery illness.

A world already spooked by the notorious Asian bird flu raced to stem the spread of this surprising new virus. Mexico closed schools and restaurants, and barred spectators from soccer games; China quarantined planeloads of tourists. But there was no stopping the novel H1N1 — named for its influenza family — from becoming the first pandemic in 41 years.

Well over 1 million Americans caught swine flu in spring and summer months when influenza hardly ever circulates; more than 500 have died.

In July, England was reporting more than 100,000 infections a week.

Argentina gave pregnant women 15 paid days off last month at the height of its flu season, hoping that staying home would prove protective.

In Saudi Arabia, people younger than 12 and older than 65 are being barred from this November’s hajj, the pilgrimage to holy cities that many Muslims save up their whole lives to make.

In Australia — closely watched by the U.S. and Europe as a predictor for their own coming flu seasons — hospitals set up clinics outside the main doors to keep possible flu sufferers from entering and infecting other patients.

“While this disease is mild for most people, it does have that severe edge,” said Australia’s health minister Nicola Roxon, who counted over 30,000 cases in a country of nearly 22 million. That’s comparable to its last heavy flu season in 2007.

Cases are dropping fast as winter there ends. But Australia still plans to start the world’s first large-scale vaccinations next month in case of a rebound, inoculating about 4 million high-risk people.

Most amazing to longtime flu researchers, this new H1N1 strain seems to account for about 70 percent of all flu now circulating in the world. In Australia, eight of every 10 people who tested positive for flu had the pandemic strain.

That begs the question: Do people still need to bother with regular flu vaccine?

Notably, South Africa is having a one-two punch of a flu season, hit first with a seasonal strain known as H3N2 and now seeing swine flu move in.

Wash your hands, sneeze into your elbow, stay home so you don’t spread illness when you’re sick.

That’s the mantra until vaccine arrives.

This week brings an important milestone. Hundreds of U.S. adults who rolled up their sleeves for a first shot in tests of the swine flu vaccine return for a blood test to see if they seem protected. It will take government scientists a few weeks to analyze results, but the volunteers get a second vaccine dose right away, just in case the first wasn’t enough.

“It’s been a piece of cake,” said Kate Houley of Annapolis, Md., who jumped at the chance to enroll her three sons, ensuring that if the vaccine really works, they’ll have some protection as school gets started. Eleven-year-old Ethan was among the first in line to be vaccinated by University of Maryland researchers. He didn’t even report the main side effect — a sore arm.

In the U.S., Britain and parts of Europe, vaccinations are set to begin in mid-October, assuming those studies show they work.

First in line for limited supplies are:

— Children and young adults from 6 months to 24 years. Babies younger than 6 months can’t get flu vaccine, so their parents and other caregivers should be inoculated to protect the infant.

Schools around the U.S. are preparing to inoculate children in what could be the largest vaccination campaign since the days of polio. The government has bought 195 million doses and will ship them a bit at a time, starting with 45 million doses or so in October, to state health departments to dispense.

The Association of State and Territorial Health Officials is negotiating with pharmacists to help perform those vaccinations. Massachusetts even is deputizing dentists to help give swine flu vaccine, and passed emergency regulations to encourage more health care workers to get either the shot or a nasal spray version.

What if people not on the priority list show up? The idea is for pharmacists to gently encourage them to come back a few weeks later, said the association’s executive director, Dr. Paul Jarris.

A concern is whether enough people are worried about swine flu to get vaccinated.

“Complacency is a big challenge,” said CDC’s Schuchat, who sees a balancing act between overly scaring people about the new flu and getting them to take it seriously.

Ten-year-old Isabella Nataro’s cousin caught swine flu at summer camp, and she readily agreed when her mother, a University of Maryland vaccine researcher, signed her and her brothers up for a study of the new shot. (The store gift card that participating kids receive after each blood test was a bonus.)

“I’m kind of worried about my friends if swine flu does come to our school,” the suburban Baltimore girl said. “I hope everybody else at my school gets a chance to get it.”