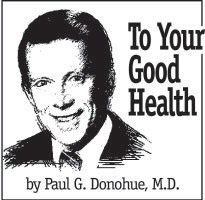 DEAR DR. DONOHUE: I retain fluid in my ankles and feet. They swell during the day. After a night’s sleep they’re normal size. I have taken a diuretic for a whole year, but it’s no better. Why? My doctor has thrown his hands up at this. — M.P.

ANSWER: The swelling will get better only if you find its cause. If both feet and ankles are swollen, the possibilities include heart failure, kidney disorders, liver cirrhosis, medicines and, strangely enough, the overuse of diuretics (water pills). One-sided ankle and foot swelling has another list of causes. The swelling gets better at night because when you’re in the horizontal position, fluid returns to the circulation.

With heart failure, people have other symptoms — breathlessness when they’re up and about. Often, they awaken at night, panting for air.

Kidney disease is detectable with a few simple lab tests.

Liver cirrhosis can be confirmed by a physical examination and lab testing.

Medicines that cause swelling (edema) constitute a pretty long list. On that list are the popular NSAID drugs, like Advil, Aleve, Motrin and Indocin. Female hormones also can bring on swelling. So can the blood pressure medicines called calcium blockers.

Diuretics, when used for a long time and for inappropriate reasons, lead to fluid retention, just the opposite of what they’re supposed to do.

On your own, cut way back on salt, not just saltshaker use but salty foods like luncheon meats and commercial soups. Elevate your legs as many times during the day as you can and for as long as you can. Wear elastic hose. Ask your doctor if it would be all right to take a vacation from your diuretic. And have you given any thought to finding a doctor who keeps his arms down?

DEAR DR. DONOHUE: You have written about sunken sternum several times, but my 18-year-old son has the opposite. He has pigeon breast. He refuses to be seen without a shirt on. I tell him to do push-ups, but he won’t. I too have pigeon breast. All he’ll do is play video games and stay home. What can I do for him? — S.S.

ANSWER: Ask the family doctor for a referral to a chest (thoracic) surgeon. Surgery for this deformity usually produces excellent results. Your son has become so self-conscious that a correction is needed for his psychological health. The operation will give him a new lease on life. Pushups won’t help.

Pigeon breast is a marked, outward protrusion of the breastbone (sternum). It often runs in families. It’s less common than funnel chest, an inward dip in the breastbone. Both are correctable.