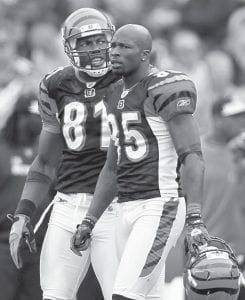 Cincinnati Bengals wide receivers Chad Ochocinco (85) and Terrell Owens walked off the field during the second half of Cincinnati’s 38-24 loss to the New England Patriots at Gillette Stadium in Foxborough, Mass., on Sunday. (AP Photo)

Terrell Owens and Chad Ochocinco were supposed to give the Cincinnati Bengals two of the best deep threats in the NFL.

When Carson Palmer lined up for a “Hail Mary” against the New England Patriots on Sunday with 1 second left in the first half, though, neither receiver was available.

Ochocinco was in the locker room receiving intravenous fluids, coach Marvin Lewis said after the game. Lewis said Owens was “being looked at,” but he would not elaborate — “That’s our business, OK?” he said.

Owens would not discuss where he was.

“Coach said he would address that,” he said.

Told that Lewis said he was being looked at, Owens repeated, “Coach said he would address that.” Asked another time about neither of them being available for a play that could really use a couple of fast-running, high-jumping, good-hands receivers, Owens went back to his old standby.

“Coach said he would address that,” he said, his tone becoming more impatient. “How many ways are you guys going to ask me?”

Ochocinco declined to comment after New England’s 38-24 victory over the Bengals, telling reporters who crowded around his locker, “Everything I have to say, Terrell will relay for me.”

The strangest part was that, even without the two star receivers, the “Hail Mary” worked, sort of: Palmer completed a 51-yard pass to Jordan Shipley, who came down with it in a crowd at the Patriots’ 3 yard-line. But time expired, so the effort and the commotion were for naught.

Ochocinco finished the game with 12 receptions for 159 yards and a touchdown, becoming the 33rd player in NFL history to surpass the 10,000 yards receiving milestone. Owens caught seven passes for 53 yards, becoming the third receiver — and the only active player — to reach the 15,000 yard milestone.

“Dude, I don’t even know what milestone I surpassed,” Owens said.

When he was told, he sneered dismissively.

“Kudos to me,” he said, without emotion, reaching around to tap his own shoulder. “I’m patting myself on the back.”