Painters include girl, 12, who survived being abused 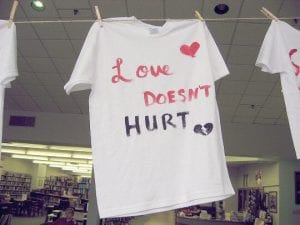 Pictured here is one of several T-shirts painted by survivors of sexual abuse. The shirts are hanging in the window of the Harry M. Caudill Library, located on Main Street in Whitesburg.

White T-shirts are hanging from clotheslines in the front windows of the Harry M. Caudill Memorial Library and the Esta Craft Conway Center for Women and Children in Whitesburg to show the impact of sexual abuse in Letcher County.

Clients who seek services through Letcher County C.A.R.E.S. and the Letcher County Family Violence Prevention Council were asked to express their feelings about their experiences with domestic violence by painting messages and drawings on T-shirts and baby “onesies.”

“These shirts were done by both adult and children survivors of domestic violence, victims’ advocates, and family members of survivors and victims,” said Beth Bowling, case manager with Letcher County C.A.R.E.S.

Because March has recently been designated as Kentucky’s Sexual Assault Awareness Month, Bowling said “The Clothesline Project” was done to raise awareness of sexual abuse in the county and to serve as a healing tool for survivors of domestic violence.

“She turned out about five shirts an hour which showed how much she had to say,” said Bowling. “It amazed us because she is so quiet and shy. It gave her an opportunity to get her thoughts out. It was very therapeutic (for her).”

Bowling said the painted “onesies” represent miscarriages, which were caused from domestic violence.

“We actually have clients who have had miscarriages from their husbands beating them until they have a miscarriage,” said Bowling.

The shirts were supplied by Letcher County Sheriff Danny Webb, Mine Signs and Decals, and Ernest Bradley of The Stitching Post.

“The Clothesline Project” began in 1990 in Hyannis, Mass. with 31 shirts on display. It is now estimated that there are 500 projects in 41 states and 5 countries with about 50,000 painted T-shirts.

According to Kentucky State Police, 1,257 rapes were reported in Kentucky during 2004. Every 5.6 minutes a forcible rape occurs in the U.S., according to the Federal Bureau of Investigation.

Bowling said 52 percent of all women will be assaulted in their lifetime and one in nine women in Kentucky have been or will be raped.

Bowling said there are currently 4,924 sex offenders registered in Kentucky, with 136 of those offenders are non-compliant with registering on the offenders’ list.

Bowling said 2076 sex offenders are in the Kentucky corrections system.

The Esta Craft Conway Center, a transitional housing facility for women and children, has served 32 families since October of 2005. Bowling said the 32 families include 32 women survivors of domestic violence and 38 children.

“Of these 32 women, nine have reported sexual assault, either as an adult or as a child and statistically, we know that number is probably much higher,” said Bowling.