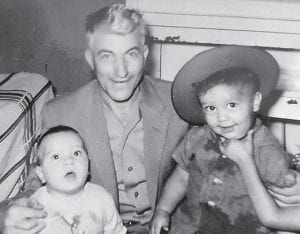 Russell Howard is pictured with two of his grandsons, Bill and Jim Adkins.

We just found out some exciting information about Marshel Tacket’s, my dad’s, ancestors. Daddy and his whole family had always enjoyed listening to the McKameys. They are a gospel-singing group from Caryville Mountain in Campbell County, Tenn., which is where Joe Tackett and his wife Peggy Ward Tackett moved from when Daddy was a young teen. Dad and Mom also have some of their old recordings on long-playing albums and their more recent ones too on CDs. Daddy would always talk about how they grew up together on the mountain, but I don’t think he knew what his cousin Alice Davis Burress told us yesterday.

I had posted this video of the McKameys singing a beautiful song on Facebook and she replied and told me that Peggy McKamey was my Great-Grandpa Billy Tackett’s sister. Well, my sister, Lucille Tacket Graves is our family historian and she went through all her records and told us that Billy had a sister named Peggy Tackett that married a McKamey, but that surely wasn’t the Peggy that is alive and singing now. 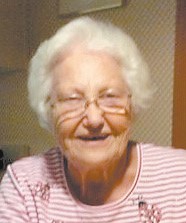 Later she researched Peggy Tackett McKamey’s line and found out the Peggy that sings is Peggy Tackett’s granddaughter. So, all these years when we have gone to see them in concert and talked to them afterwards about them being from the same place as Daddy, we never knew we were actually kin to each other. This might just be hogwash to you all, but it was a nice little jewel to us.

There were so many birthdays and anniversaries posted on Facebook this past week. But I will try to mention a few of them. One was Jim Adkins on the 24th. I went to Whitesburg High School with Jim and his wife Ida Webb Adkins. Jim is a grandson of Russell Howard. Then Jim’s aunt, Norma Howard, celebrated her birthday on the 27th. Another birthday in our family was Chasity Watts Mason. Hers was the 25th. She is the daughter of Rob and the late Sharon Watts and the daughter-in-law of Rick and my sister, Charlene Mason.

Two anniversaries mentioned on Facebook were Arnold and Etta Terry on the 23rd and Josh and Martina Yonts on the 23rd also. 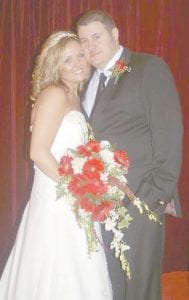 There are two families that are asking for our prayers for God’s comfort in the loss of some special people. One of them is one of my best friends in college, Bob Smith. His mother, Elizabeth Smith, passed away last week. I had the pleasure of meeting and visiting with her a few times when we were in college. She was a delight to know. Please remember Bob and his wife Debbie and their children and grandchildren in the next few days and months.

The other one asking for prayers was one of the Marlowe Coal Camp families. Margaret Combs messaged me and wanted me to let everyone know her aunt Laura Napier Holland has passed away. I copied her entry from Facebook. Mommy said she remembered Laura. Margaret also said Laura had dated my uncle Hubert Tackett when they lived at Marlowe. 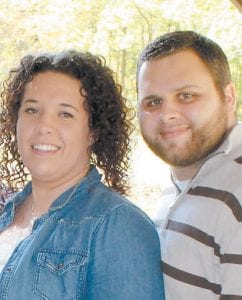 “Laura was born April 10, 1936 in Perry County, and was the daughter of the late William Napier and Mary Hall Napier. She loved working in her yard, watching NASCAR and all different ballgames; and she was a true Tarheels fan. In addition to her parents she was preceded in death by her loving husband of 45 years, Edward “Tiny” Holland; and daughter, Denita Sloan.

“Those left to cherish her memory are her niece (caregiver) Margaret Combs; numerous nieces and nephews; and her special friends, Patty, Susan, Martha and Jan.

“I miss your sweet smile, the long talks we had at night, the love you showed to everyone. From the time I was a little girl, you were always there for me. You had so many heartaches from losing all our family to losing your precious daughter and your husband, so many times you told me that you couldn’t understand why God wanted you to stay here when everyone else was gone. I always knew it was for me. He knew I needed you in my life. Now there’s a void that can’t be filled. You taught me to be strong and to always trust in Jesus and to put him first no matter what. While you were sick the past few months you would wake me up through out the night praying. I always knew what a wonderful loving Christian you were. All through the night we talked about everything but, mostly family. I will always cherish those memories. I really wish you had written a book. I begged you to do that because so many people would have related to the wonderful life you lived. Especially in Kentucky. I love this picture. You taught me so much about cooking and every time I came to your house you made sure to buy shrimp because you knew I loved it. You were telling me about dressings for food and then you smiled and said honey, say the blessing so we can eat this shrimp it’s getting cold. Oh my! How I miss you. I know your rejoicing now with all the family. I love you aunt Laura. Rest now. You’re home.”

Please don’t forget our pastor Bill Jones and his wife Sandy and their children and grandchildren, with the situation they are dealing with in the death of their son and his girlfriend in 2016.

I’m going to close here once again remembering what Mommy’s best friend Oma would always end this column with, try to be in church somewhere this Sunday and if your church has services throughout the week or on Sunday evening, be there then too.