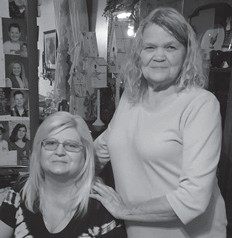 I hope everybody had a wonderful Mother’s Day. Ours was certainly a lot different than last year’s. Last year when I told Mom we couldn’t have a get-together, she wanted to sneak and have one anyway.

This year we had such a nice time. My brother, Albert Tacket, got to use his “road find grill” for the first time. Our nephew, Blake Mason, said, “Now I know why you went back and picked that up off the road. I don’t blame you one bit.”

He had a trial run on the hamburgers, though, and had to readjust the distance the charcoal was to the meat. We wish everyone in the family could have been here with us.

We had a super surprise visitor. Mom’s granddaughter, Lydia Graves, went out of her way on her way to her parents’ house in Bristol, Va., to see her Mamaw. Lydia Graves, it was so good to see you. Mom is still talking about how pretty you looked and how good it was to see you.

Speaking of visitors, my brother Albert was returning a visit to Phyllis Combs the other day. He just drove up in their driveway and her husband Stanley was out in the driveway so he started talking to him. Phyllis had mentioned to us sisters that she was anxious to see Albert again, but when Albert came home, he said Phyllis came out and spoke to Stanley and then just went back in the house. So, Charlene messaged her and asked did she not recognize Albert. Evidently that wasn’t her that stepped out in the driveway, because she told Charlene she heard them talking out there but thought it was her brother Leonard Begley. I told Albert I was going to tell Leonard when I saw him, Phyllis surely paid him a huge compliment. 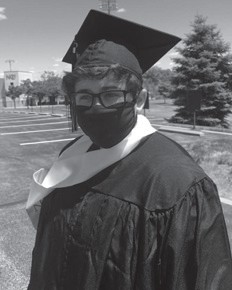 Rocky Yonts and I were talking about boiling eggs and the best way to boil them. I have used my Instant Pot since seeing how on Pinterest. (If you have a computer and haven’t discovered Pinterest, you are missing a great resource.) Anyway he told me a tale about something that happened to him involving a kettle and eggs that were left on the stove for a few hours. Since I told him I wasn’t going to put it in the paper I’ll not tell you the rest of it. 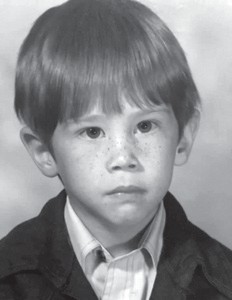 Jack Quillen will have a birthday on the 12th.

Anyway, that reminded me of a time when I was mowing Mom’s grass back in 2015 or so and came across something that puzzled me. There beside the porch steps lay about four or five black egg-shaped something or others. I got a stick and kinda rolled one around and the egg shell cracked. I wondered what kind of snake laid black eggs.

Later, I told Mom, “You’re never going to believe what I found out by the porch steps.” After I told her she made a face and said, “Oh, I was hoping I had thrown them far enough away that no coon could get them.” She then admitted that she had put a kettle of eggs on to boil and had forgotten all about them when she got on the church bus. About two hours later she came home and found the kettle boiled dry and the eggs black as coal. Rocky, at least hers didn’t explode and make a mess in the kitchen. That’s about the time we started cooking for Mommy.

Johnny White will celebrate his birthday on the 13th.

Well, I actually got to see Lizzie Mae Wright last week at Food City. I love that this 91-year-old young woman can still get out and do her own grocery shopping. She amazes us all. She told me that I had forgotten part of her news from last week. Not only did Bobby Bates come to visit her, but his son and his daughter-in-law were with him. His daughter in-law Felicia Bates is also Lizzie Mae’s cousin.

Another member of our senior citizen program, Maxine Quillen, has had a lot going on for the past week. She sent me these pictures and gave me permission to post them in this week’s paper. Her oldest granddaughter, Cheyenne Brooke Jent, graduated from Northern Kentucky University and received her MBA. Maxine wasn’t able to go to the graduation because she has been having lots of leg and back pain. One of her friends, Johnny White, will celebrate his birthday on the 13th and Maxine’s son, Jack Quillen, will have a birthday on the 12th. Maxine is a faithful walker at the rec center and I know her back and leg pain are making it hard to keep up her walking. 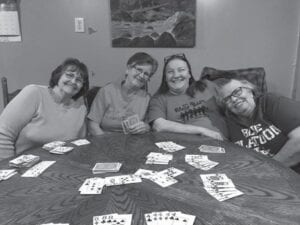 I also saw a wonderful post on Facebook that had four of our senior citizens in it. Iona Noble, Vernetta Roark, Rose Collier, and Joyce Standifer were some of the best card players at our Letcher County Senior Citizens program. Hopefully it won’t be long now till we can all get together again.

I saw some wonderful news posted on the Letcher County Judge/Executive’s Office Facebook page. Kimber Collins is a fifth grader at Jenkins Elementary and became the National Champion of the 2021 National Archery in the Schools Program. She scored 284 out of 300 and placed first out of 1,549 in the Elementary Girls Division. She also came in first in the NASP/IBO 3D Challenge Outdoor Open Championship in Prestonsburg.

All of you that are frequent travelers across the Little Shepherd Trail, I saw where a section will be closed for major repair. This is approximately four miles in from Hwy. 119. It will be closed for six to eight days depending on the weather. There will be places where you can turn around at the barricades so the entire length won’t be closed. If you have never been across the trail, you need to find time to travel it and visit Kingdom Come State Park.

My birthday mentions are Cowboy Wright on the 6th, Marlene Bielecki on the 8th, Debbie Cook on the 9th, Ben Sparks on the 10th, Rena Kiser Begley on the 11th, Derenia Boggs Dunbar and Jack Quillen on the 12th and Stephanie Meade Collins of the 13th.

Continue to pray for the families of Keith Adams, Donnie Ratliff, Orville Sturgill, and also the family of Pete Roberts. Our pastor, Bill Jones, and his wife Sandy and all their family still desire our prayers.

I’ll end here this week by begging you all to get to church if at all possible.