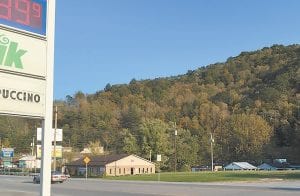 A new Taco Bell restaurant will be located on the empty lot seen at bottom right in this photo taken from near the entrance to the Sugar Shack.

Construction is expected to begin soon on a new Taco Bell restaurant in Whitesburg.

Whitesburg Mayor James Wiley Craft said he has been authorized by the Johnson family of Perry County to announce a stand-alone Taco Bell restaurant will be built in West Whitesburg on property formerly owned by the late Nora Honeycutt. The lot is located directly across KY 15 from the Double Kwik convenience store known as the “Sugar Shack.”

“At long last I can announce the rumors that Whitesburg is getting a Taco Bell are no longer rumors,” Craft said. “The Johnson family has authorized me to announce the construction of a stand-alone Taco Bell restaurant with two drive-thru lanes.”

Craft said the restaurant will be built by Marty and Teresa Johnson, who own and operate the Wendy’s restaurant also located in West Whitesburg.

“They project there will be 50 jobs created with construction of the new restaurant,” Craft said. “This will bring to four the number of new businesses that have opened or announce they will be opening in Whitesburg.”

The Kentucky Mist Moonshine Distillery, the Thirsty Heifer restau- rant and Heritage Restaurant opened in downtown Whitesburg in late September. Craft said the Johnsons didn’t tell him the date they plan to have the Taco Bell open, but said surveyors were on the site Tuesday afternoon.

“Whitesburg is growing and is a focus of attention from local and outside businesses,” Craft said.