Taking a turn of corn to the mill 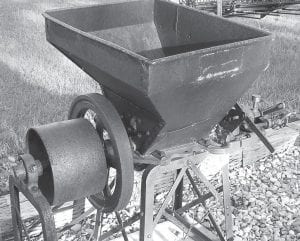 Smaller antique mills like this one are operated by a tractor and can be seen for sale frequently on the Internet.

Note: This writing is based on a conversation with Letcher County native Kenneth Blair.

The Monroe S. Blair family lived in the hollow behind Letcher Elementary School. The family raised white corn, which they dried, shelled, cleaned, and took to the mill for grinding into meal for making cornbread and, occasionally, mush.

In the 1930’s, the closest mill was sometimes at Wilburn Hampton’s at the mouth of Doty. At other times, they took their corn to John Hampton’s mill, which was near the railroad and close to the downstream side of Letcher Drive. His mill was operated by a car’s engine and transmission. A pulley that drove the belt to operate the mill was attached to the transmission. Hampton operated his mill one day a week, perhaps Friday.

The Blair family also took their corn to the mill operated by Jim and Annie Back Blair’s children near the mouth of Perkins Branch. This mill shed was between the old road to Perkins Branch and the main highway.

The fill of rock and dirt between Kentucky Highway 7 and Rockhouse Creek from Perkins Branch upstream toward the railroad bridge was made in 1947 when the railroad was constructed from Caudill’s Branch (Carbon Glow) upriver toward Deane. Rodney Ison’s garage, Jean Hampton’s Dairy Bar, and the grocery store operated by Dennis and Granvil Blair were built about the mid- to late-1950’s.

There was a swinging bridge crossing the creek at this curve. At the other end of the bridge, a narrow footpath ran around the steep hillside toward Perkins Branch. There, a footbridge crossed the branch to the road up the hollow. This bridge was made by nailing cross boards to two logs placed next to each other across the branch. This path and both bridges were built on the property owned by Millard Caudill. This property was later owned by Josie Hampton and then Darrel and Jean Hampton. The residents of Perkins Branch were very appreciative of the Caudills and the Hamptons for allowing the path and bridges to be on their property.

Before the current bridge across Rockhouse Creek was built about 1960, the residents of Perkins Branch needed to leave their vehicles out of the Branch during times of high water. They could walk out of Perkins Branch and across the swinging bridge to their vehicles to go to work. However, because weather prediction was less advanced then, many times the residents became trapped with their vehicles on the wrong side of the creek. To solve that problem, some of the Branch’s residents rented space in my father’s three-car garage across the railroad where the driveway to Letcher Elementary is now. Those folks renting the garage were never caught unaware by rising water, although they did have to walk out of and back in the Branch each day.

In years past, naturally occurring deep holes of water were in our creeks and streams. These holes made for good fishing, swimming, and diving. One such hole was immediately upstream from the ford across Rockhouse Creek into Perkins Branch. This hole of water was called the “Boat Hole,” so named because someone had made a wooden boat and left it there for people to use. One winter, the ice froze so hard that Monroe Adams drove his Model A Ford up and down the Boat Hole.

Let’s return to taking a turn of corn to the mill, from which I have digressed.

The Blairs mill was operated by a kerosene engine similar to, but considerably larger than the engines that operate portable mills on display at festivals. A belt ran from the engine to the mill. Since the engine did not have a starter, the engine had to be started by tugging on the belt. Several people grabbed hold of the belt and gave a hard pull. Once the engine started, the people needed to quickly release the belt.

In the 1950’s, the Monroe Blair family took corn to the mill operated by Jonah Caudill in a shed in the Big Field near the Jeremiah Post Office. Caudill’s mill was operated by his tractor. My childhood memory has it that the tractor was jacked off the ground and a belt ran from a rear wheel to the mill. Jonah Caudill would start his tractor and put it in gear to move the belt. However, the mill’s belt may have been attached to a pulley on the tractor’s power take off, if his tractor had one.

Our mountain vernacular often pronounces “ah” at the end of a word as “er.” Jonah Caudill’s first name was pronounced by many people as “Jone-er” rather than “Jone-ah”. And some people pronounce the name of the Jeremiah Post Office as “Jeremi-er” for the same reason.