Taking the next step in weight-loss journey 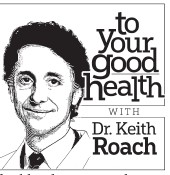 DEAR DR. ROACH: I have been trying to lose weight, with no results. I have cut back on carbs and sugar. In general, I watch what I eat. I also go to the YMCA and work out — in the water mostly, because my legs hurt so much. I weigh 286 pounds. I would love to lose 100 pounds, but I am not having any luck.

When I go to my primary care doctor, he tells me that I need to lose weight. When I tell him what I have been doing to try to lose weight, he doesn’t believe me. I think I need more help with my weight problem. I don’t know if I should find a new doctor, or what! — J.S.

ANSWER: I have heard variations of this story so many times from my own patients that I am sure you are trying. However, losing weight is a very difficult thing to do. Once your body has reached a certain weight, it is incredibly hard to get things turned around. Fortunately, it is possible for everyone to lose weight. But you certainly do need some help. So does your primary-care doctor. As an alternative to getting a new one, I think it might be worthwhile to see an expert in weight loss, since this is a field requiring knowledge of new medications, as well as potentially using medications approved for other conditions in an “off label” way to help you lose weight.

One of the first things to look at is the medicines you already take. Most primary care doctors don’t know (and I mightn’t have, if I didn’t work at an institution where research and teaching about this goes on) how many medications for blood pressure, depression, epilepsy and diabetes (among others) can cause weight gain as a side effect. Sometimes switching medications can help a great deal. Most primary-care doctors are uncomfortable prescribing medications for weight loss, especially after the disaster caused by the combination of dexfenfluramine and phentermine (fen-phen). There are newer and safer medications now.

Metabolic conditions such as Cushing’s disease and hypothyroidism need to be looked for.

Careful evaluation of the diet — using food diaries and often enlisting the expertise of a registered dietician nutritionist — is of paramount importance. Since there is so much misinformation, I almost always find people eating unhealthy foods and avoiding healthy ones, to their detriment.

You should be congratulated on finding an exercise that you can do, and be encouraged to do so every day.

Finally, since you are 100 pounds or so overweight, your doctor also should consider the risks and benefits of bariatric surgery, the most effective way (and only reliable one for most people) of losing that much weight. ©2016 North America Synd.

An ultrasound showed one of Sarah Gray’s unborn twins was missing part of his brain, a fatal birth defect. His brother was born healthy but Thomas lived just six days. Latching onto hope for something positive to come from heartache, Gray donated some of Thomas’ tissue for scientific research — his eyes, his liver, his umbilical cord blood.

Only no one could tell the Washington mother if that precious donation really made a difference. So Gray embarked on an unusual journey to find out, revealing a side of science that laymen seldom glimpse.

“ Infant eyes are like gold,” a Harvard scientist told her.

“I don’t think people understand how valuable these donations are,” said Gray, who hadn’t grasped this either until her yearslong quest brought her face-to-face with startled scientists. They had never met a relative of the donors so crucial to their work.

Families often find comfort in learning how many lives were saved if they donated a loved one’s organs for transplant. But donating a body for research gets less attention — there are no headline-making “saves.” Yet critical medical research in labs around the country depends on scientists’ ability to work with human cells and organs, so they can study both normal development and how disease does its dirty work.

“A lot of people, if the tissue doesn’t get used for transplant, they think it’s kind of second-rate tissue or something. I’d like them to know that people who do research with human tissue are doing worthwhile things that are going to, hopefully, lead to cures for all kinds of diseases,” said Dr. James Zieske, a corneal specialist at Harvard and the Schepens Eye Research Institute, whose description of treasured infant eyes spurred Gray’s hunt.

Now, hoping to help other families facing decisions about donation, Gray has written a book, “A Life Everlasting, The Extraordinary Story of One Boy’s Gift to Medical Science.” Gray and two of the scientists she met in her quest spoke with The Associated Press about donation for research.

Neonatal Donations Of Any Type Are Rare

Gray’s obstetrician didn’t think donation was an option for a baby with this birth defect, called anencephaly. Only when Gray persisted late in pregnancy did she learn, from the Washington area’s organ procurement agency, that her baby’s organs probably would be too small for transplant but that donation for research was an option.

Statistics from the United Network for Organ Sharing show that organs from a dozen newborns, those younger than a month old, were donated last year for transplant.

On the research front, Dr. Arupa Ganguly of the University of Pennsylvania studies retinoblastoma, eye cancer that attacks young children. Before receiving Thomas’ tissue, she had waited six years for donation of a healthy young retina to compare with diseased ones.

Cells taken from younger tissue typically grow much better than an adult’s, said Zieske, who could recall receiving infant corneas only two or three times in his career. Thomas’ corneas were ordered to study how to repair blindness-inducing corneal damage.

Most Any Tissue Can Be Used

On that day in 2010, Thomas died at home in his father’s arms. The organ agency retrieved his body, and recovered his eyes and liver. Blood from the umbilical cords of both Thomas and his healthy identical twin Callum already had been shipped to Duke University researchers studying what causes anencephaly.

Two years later, all Gray knew was where Thomas’s tissue had been shipped. So during a business trip to Boston, she called the Harvard-affiliated eye lab, identified herself as a donor mom, and asked for a tour — a first for the lab, and one that changed the scientists’ perspective.

“I still think more about, when we get a donated cornea, who that came from,” said Zieske.

Callum, now 6, even started coming along.

“We explained to him there are some special scientists there working on helping other people, and they’re using some stuff from Thomas to help them,” said his father, Ross Gray.

“We always get a sample but we don’t see the person behind that sample. The lab has really established a bond with that family. And I think it makes the work a lot more meaningful,” Ganguly said.

The Journey Isn’t Over

Gray changed careers to work for the non-profit American Association of Tissue Banks. That brought her to a meeting where scientists debated if it was ethical to test a new technology — gene editing — to fight inherited diseases. “If you have the skills and the knowledge to fix these diseases then freaking do it,” she told the group, recounting how Thomas had suffered seizures each day of his brief life.

And when Gray recently had a new baby, daughter Jocelyn, she donated the placenta for wound-healing therapy. She’d like to visit that lab, too.