Talks between ARH, nurses on hold despite ‘progress’ 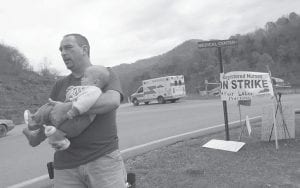 MULTI-TASKING – Registered nurse Jerry Blevins held his son, Brennan, while picketing last week outside the Appalachian Regional Healthcare hospital in Harlan. It’s been a long two months for the some 750 registered nurses like Blevins at ARH, the region’s largest hospital system with nine hospitals in eastern Kentucky and West Virginia, with more than 600 nurses walking the picket line. (AP Photo/ Carla Winn)

Negotiations between striking nurses and Appalachian Regional Healthcare have ended for the time being, even though “substantial progress” is said to have been made during the talks.

After weeks of stalemate, negotiators on both sides of the bargaining table indicated last week that some progress has come from talks with a federal mediator and state officials. Negotiations resumed November 16, but Pat Tanner, chief negotiator for the nurses, said no significant movement was made and no further meetings were scheduled.

Negotiators from ARH and United American Nurses were meeting in Lexington to discuss the strike which began October 1 and affects 750 nurses at nine hospitals, including the Whitesburg ARH.

Union spokesman Suzanne DeMass Martin told the Charleston (W.Va.) Gazette “that very substantial progress was made on the issue of the use of mandatory overtime without compromising patient care.” Martin said the nurses’ union has withdrawn “major economic proposals in order to focus exclusively on patient safety, safe staffing and quality patient care.”

ARH President and CEO Jerry Haynes told the Associated Press that he appreciates the conviction of the 600 nurses who are on the picket lines.

“We are a stubborn people,” Haynes, a mountain native, told the AP. “Unfortunately, that doesn’t always serve us all well. There is a strong culture in Appalachia that’s grounded in the coal mining industry. You have a strong culture of unions. You have a lot of heritage and history here.”

So far, about 125 positions vacated by striking nurses have been filled and nearly 175 nurses have crossed the picket line. ARH is relying on nursing supervisors, temporary nurses, licensed practical nurses and nurses’ aides to fill the gaps.

The contract rejected by the nurses would have increased insurance premiums for families, eliminated a policy of paying nurses 40 hours of pay for 36 hours of work and reduced holiday pay from double-time to time-and-a-half.

The pay range for ARH nurses is $47,000 to $65,000. The striking nurses, however, say the dispute isn’t about salaries. They say staffing levels were spread too thin and mandatory overtime had become the norm.

“Do I think we have a problem sometimes? Yes. Are we perfect? Absolutely not,” Haynes said. “Is it management’s intent to work short and not provide care to our patients? No.”

James Smith, the attorney representing ARH in the negotiations, said the November 16 session consisted of discussions and focused on the patient care issues the union says the strike is about. Smith said the federal mediator informed ARH that the union would not have further discussions with ARH on Friday, and that the union was working on setting up a meeting with West Virginia Governor Joe Manchin.