Tara Damron will soon be inducted into Phi Kappa Phi 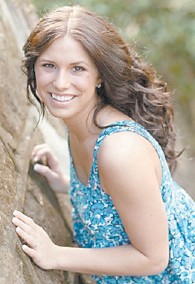 Tara Damron of Jenkins is one of 78 Eastern Kentucky University juniors, seniors and graduate students who will be inducted into the EKU chapter of The Honor Society of Phi Kappa Phi during a ceremony Nov. 13.

Founded in 1897 at the University of Maine, Phi Kappa Phi is the nation’s oldest, largest and most selective all-discipline honor society. The Society has chapters on more than 300 campuses in the United States, Puerto Rico and the Philippines.

Membership in Phi Kappa Phi is by invitation and requires nomination and approval by a chapter. Only the top 10 percent of seniors and 7.5 percent of juniors, having at least 72 semester hours, are eligible for membership. Graduate students in the top 10 percent of the number of candidates for graduate degrees may also qualify, as do faculty, professional staff and alumni who have achieved scholarly distinction.