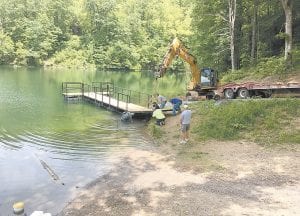 Ron Brunty, chairman of the Letcher County Soil Conservation Board, said the board used the unexpected money to buy materials for boat docks at Fishpond Lake and Jenkins Lake, and buy durable tables and portable dry-erase boards for outdoor classrooms at Lilley Cornett Woods and West Whitesburg Elementary.

Since the money was unbudgeted, the conservation district board had to find something to spend it on.

“We just looked at each other and said, let’s do something nice with this instead of just putting it into our operating budget,” Brunty said. “The board decided to use it to do some special projects.”

The first project was the Fishpond Lake boat dock, suggested by board member James McAuley. He approached his son-in-law, who is the welding instructor at the Letcher County Area Technology Center, about his students building the dock as part of their class. He got the carpentry class involved as well. 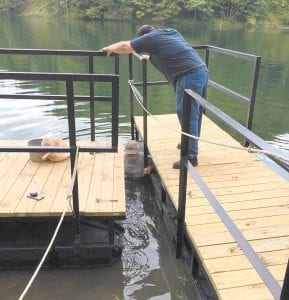 James McAuley is in the water working on a new boat dock at Fishpond Lake while Dustin Hollin assists.

Brunty said the money from the Conservation District wasn’t enough on its own, so Mountain Comprehensive Health Corporation, Phillip Hampton and Randy Blair also contributed to the project.

“The people we bought the materials from gave them to us at wholesale, so they didn’t even make a profit,” Brunty said.

He said the materials came from Frazier’s Farmers Supply and Buchanan Pumps.

The county then used its workers and equipment to haul the sections of the dock to the lake last week, where it was floated and assembled on the water.

Brunty said the district hadn’t publicized the plans for the dock when the fiscal court asked representatives of special taxing districts to come before the court to justify their tax rates last summer. A magistrate mentioned the dock, and then Jenkins Mayor Todd Depriest asked if the district could help with another dock for the lake at Jenkins.

The district board agreed, and the city is having that dock built. Brunty said plans call for that dock to be anchored to the Lakeside Drive side of the lake temporarily, but the city has plans for a walking track that would provide access to the opposite side of the lake beside KY 3086. If that track is built, the dock will be floated across and anchored on that side permanently, Brunty said.

The rest of the money is being used to furnish outdoor classrooms at Lilley Cornett Woods and West Whitesburg Elementary School.

The money came from 2015 taxes on real property, personal property, and business equipment that were unpaid because gas company EQT was disputing the state’s assessment. Letcher County Judge/Executive Jim Ward said in May 2017 that EQT had reported its gathering lines and main pipelines as manufacturing equipment, which is taxed at a much lower rate, for at least three years, but he was unsure whether any additional money would be coming for the other years.

According to documentation from the state Department of Revenue, Letcher County Soil Conservation received $17,314 from the reassessment. That money was used for the four special projects.