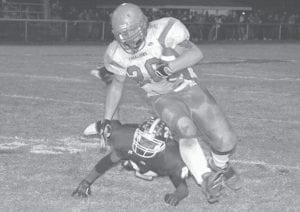 Jenkins back Jonathan Taylor returned from an injury in the third quarter to run through the Cumberland defense in the fourth quarter during the Cavaliers’ play-off loss Friday night. (Photo by Chris Anderson)

The Jenkins Cavaliers’ football season came to an end Friday with a 53-28 loss at the hands of the Cumberland Redskins. The loss eliminates Jenkins from the play-offs.

The Cavs fell to the Skins at home during the regular season, 49-7, and were looking to make a statement in the playoffs. The Jenkins defense could not contain the rushing attack by Cumberland, and the offense could never gain the momentum needed to give Cumberland a fight.

The game was not without positives for the Cavaliers, however. Senior Jonathan Taylor showed a lot of heart in the game by coming back to play after suffering what appeared to be severe injury. In the third quarter, Taylor was in a pileup near the 50 yard line and was visibly shaken. When coaches and officials tended to Taylor, he was forced to lie on the ground because pain in his back. For several minutes, the Jenkins fans waited for signs that Taylor was safe. He was, and he managed to walk off the field. An ambulance crossed the field to pick up Taylor, but he refused treatment, saying he was OK and free of pain.

Taylor re-entered to play the fourth quarter and the crowd erupted. He went on to score the team’s final touchdown of the game and the season, and the last of his high school football career.

Earlier in the game, Jenkins quarterback Chris Puckett connected with Stephen Stephens for a 22 yard touchdown pass, then connected with Jonathan Taylor on a nine-yard pass that Taylor rushed in.

Defensively, Chris Puckett and David Walker had nine tackles each, and Matt Johnson and Matt Langeeau each had eight tackles. Johnson also had a fumble recovery in the game.