Taylor Swift, at 18, poised to be superstar 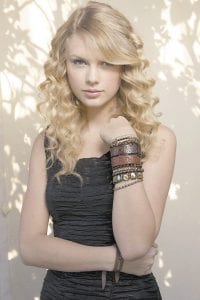 Taylor Swift remembers the day she walked into one of her writing sessions — filled with anger.

The boy she liked was acting up, and the singer could barely get out a greeting before unloading her frustration on co-writer Liz Rose.

“I walked into Liz’s house, and I said, ‘I can’t believe what’s going on right now, I’ve gotta tell you about this.’ I told her all about it,” says Swift. “She goes, ‘If you could say everything you were thinking to him right now, what would you start with?”‘

So Swift began venting: “I would say to him, ‘I’m sick and tired of your attitude, I feel like I don’t even know you’ … and I just started rambling, and she was writing down everything that I was saying, and so, we turned it into a song.”

That song, “Tell Me Why,” on her hotly anticipated sophomore CD, “Fearless,” is an example of why Swift is not only one of country music’s brightest and most popular young stars, but is also poised to become pop’s next superstar act — just weeks away from her 19th birthday.

“I think the reason why all of that has started happening is because I was writing about what was happening in my life and I don’t hold back on details and I mention people’s names and I like my songs really personal,” Swift said in an interview on her swank tour bus, a few hours before a recent concert at the Mohegan Sun casino in Connecticut.

“I guess when you write your songs like you’re writing in a diary, more people can relate to it than you think. I thought because my songs were so personal that nobody would be able to relate to them … because I said all these names that were only significant to me,” she says. “But apparently they were significant to more people than just me.”

Since Swift made her debut in 2006 with her self-titled CD, she’s sold 3 million albums and scored country hits such as “Our Song” and “Picture to Burn.” She has also become one of the few recent country singers whose celebrity has translated to a mainstream audience.

MTV — not known for supporting country music — tapped her to host a week on “TRL,” and she was also their red-carpet reporter at the recent MTV Video Music Awards.

She’s graced the cover of celebrity magazines like Us Weekly, and “The Ellen DeGeneres Show” dedicated an entire show to her new album release. (During the show, Swift dished about her recent breakup with Jonas Brothers’ heartthrob Joe).

Swift has a line of dolls in her likeness, recently performed with Def Leppard on a CMT special, sang the national anthem during the World Series and is planning a line of sundresses for Wal-Mart.

But the teen, who was raised in Pennsylvania and now lives in the Nashville, Tennessee, area with her parents and younger brother, doesn’t play up her crossover success.

“I try to look at what has happened to my career less as crossover and more as spillover,” says Swift, as her mother, Andrea, sits in the next room.

Like most 18-year-old girls, Swift is focused on boys and relationships. On “Fearless,” due out Tuesday, there are songs that touch on the dreams of that fairytale romance (like the current hit “Love Story,”) the guy who doesn’t know you exist (“You Belong With Me”), the bad guy you fall in love with (“The Way I Loved You”) and, of course, the jerk (“You’re Not Sorry”).

“I’m very fascinated by boys and love and relationships, so the boys that came in and out of my life over the past two years definitely shaped this record,” Swift says.

What distinguishes Swift from her peers is her gift for songwriting. Swift, who also plays guitar, wrote or co-wrote every song on her first CD. On her latest album, she has even more songs that feature just her name as the songwriter.

Colbie Caillat, who co-wrote the tune “Breathe” on the CD, says: “The fact that she’s been writing songs since she was 13 or 14 is amazing. They are straight from her heart. It’s what she was going through, what she’s thinking about.”

While the songs reflect the thoughts of a teenager, they are written with a sophistication that songwriters years older have yet to master. What could seem like youthful musings become, via Swift’s pen, complex stories that are also relatable to adults decades older. It’s one reason why publishing company Sony ATV made her the youngest songwriter they had ever signed.

It’s also why Swift, at 15, walked away from a development deal with RCA Records because the company wasn’t interested in her recording her own songs.

“You don’t just walk away from a big record label like that when you’re an unsigned artist,” Swift says. “But I had a gut feeling about it, and some of the best decisions I’ve made in my career have been based on solely gut feelings and my instinct.”

Swift seems to be charting her own course, doing everything from tracking her profits to designing her album booklet: “I absolutely want to have my hands on everything that has to do with my career.”

She says her stockbroker dad and stay-at-home mom never pushed her into a childhood of performing, which included singing at minor-league baseball games and singing in small clubs when she was barely a teen.

Her mother echoes that — describing Swift as an “oddball in Pennsylvania” who had trouble fitting in because of her love of country and her quest to become a singer-songwriter. When the family moved to Nashville to help Swift pursue her dreams, they made sure she didn’t go to a school attended by children of industry insiders.

“I wanted there to be an escape hatch,” she says. “I never wanted it to drive her crazy.”

But Taylor, whom Andrea Swift describes as a perfectionist, never lost sight of her goal. As she watches her daughter rehearse like a seasoned pro for her opening act on a bill with Rascal Flatts, she says: “There’s now a level of confidence because now she knows she has attained a certain level of success.”

Still, Swift has kept her teenage exuberance. Personable with a quick wit, she spends most of her free time on the computer, making humorous clips for the Web, and proudly shows off her latest work on her laptop. And she talks about hanging out with her three best friends — fellow country singer Kellie Pickler, actress Selena Gomez and a high school friend named Abigail, who pops up as a character on her new record.

“I still hang out with the best friend that I had in ninth grade … I still get caught up on all the gossip of what’s going on in my hometown whenever I’m back, and I honestly feel like I’m an 18-year-old girl,” she says. “When I’m in business meetings, I’m not an 18-year-old girl, but when I step out of those meetings, I get to be 18 again.”