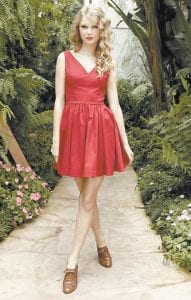 In the CD booklet for Taylor Swift’s third album, “Speak Now,” she poses for a photo tied to railroad tracks, looking like a mock damsel-in-distress with an oldfashioned dastardly villain hovering over her. The scene pokes fun at Swift’s image and songs, which often portray her as a victim to scheming fellows.

In “Speak Now,” Taylor extends that role, but she also expands and deepens it, as her songs engagingly explore how a romantically obsessed young woman can survive manipulative paramours and continue to seek a love that is untainted and sturdy.

Reporters now examine Swift’s lyrics for clues about celebrity dates: Is the brutally honest “Dear John” about rocker John Mayer? Is the apologetic “Back to December” about actor Taylor Lautner? But what matters the most is the substance in these personal tales. Like a country-pop Jane Austen, Swift excels at revealing the inner thoughts and travails of a quixotic young woman who refuses to settle for less than true, abiding love.

“Speak Now” expands Swift’s palette. The 20-year-old now writes about the purity of a younger friend (“Never Grow Up”), about critics and bullies (“Mean”), about that infamous Kanye West moment (“Innocent”) and about virtue giving way to passion (“Mine”). Musically, she also maintains a wide sweep, from lush strings to acoustic balladry to crunching rockers, sounding most comfortable on the tender songs, straining a bit the harder she rocks.

As Swift ages, her songs cling to a perception that she, and young adults like her, can maintain fairytale dreams about romance, destiny and family. More determinedly than ever, her songs concede that the real world may cast clouds on these fantasies, but she’s not giving in to cynicism or pessimism yet.

CHECK OUT THIS TRACK:
“Sparks Fly” has been a concert favorite all year, and the lived-in song displays Swift at her most vocally and lyrically expressive. Using the sweet smile of a prospective beau to launch into a romance-novel scenario, Swift envisions a day of dancing among dimly lit lanterns and kissing in the rain, their mutual passion washing away all the shyness and doubts.