Taylor was focus of veterans tribute held in Whitesburg 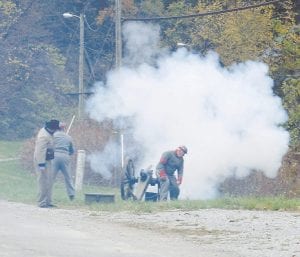 Richard Brown, Manton Cornett and Willis Strong, members of the Ben Caudill Camp No. 1629 of the Sons of the Confederate Veterans, performed an artillary salute during the Veterans Day appreciation program held in front of the Letcher County Veterans Memorial Museum in Whitesburg on November 10. The cannon is a Mountain Howitzer.

The day of November 10 was declared “Ben B. Taylor Day” in honor of Millstone resident Ben Buster Taylor, a retired sergeant with the United States Army Special Forces, known also as the Green Berets.

An executive order read aloud at Saturday’s celebration by Letcher County Judge/Executive Jim Ward says Taylor, who was unable to attend the event, “bravely served his country for over 20 years through two wars and remains today as one of the county’s most highly decorated war veterans.”

According to the order, Taylor “continues to serve the people of Letcher County and its veterans by working to preserve the memory of all veterans through the Letcher County Veterans Memorial Museum.”

Taylor, who is a former sheriff of Letcher County, has spent countless hours gathering military related memorabilia for the museum so community members can view some of the military history of the county. 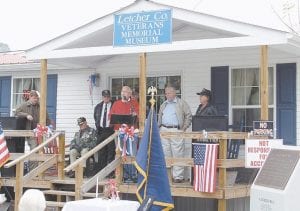 “I wanted to have something to show Letcher Countians about veterans of this county,” Taylor told The Mountain Eagle in August 2004.

During the Veterans Day appreciation program, a candle lighting ceremony honored all members of the military who were killed in service. Veterans who attended the event were also recognized and were given a round of applause by those in attendance.

“A hero is defined as having extraordinary courage,” said Whitesburg Mayor James W. Craft. “All you gentlemen and ladies who are in uniform here today are our heroes and we are gathered here today to honor you.”

“We need to thank all of the veterans out there that have fought and died for us,” Ward added. “We are very proud of our veterans and we must remember too that we have soldiers fighting in foreign countries now.”

Taylor represented the Green Berets as a pallbearer during the funeral of former President John F. Kennedy, who was assassinated in November 1963.

Veterans Day is observed each year on November 11, the anniversary of the signing of the armistice between the Allies and Germany which officially ended World War I. The German signing of the Armistice took place in Compiégne, France on the 11th hour of the 11th day of the 11th month of the year 1918.