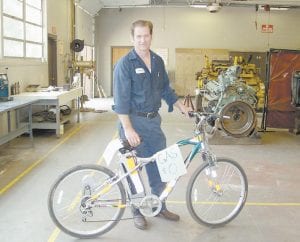 GASOLINE SAVER – Randall Adams, of Payne Gap, rode his electric bicycle to work at the Letcher County Vocational School in Whitesburg last week. He wants to start making his own electric bikes.

The 55-year-old who teaches diesel mechanics at the Letcher County Vocational School changed his mode of transportation last week from a pick-up truck to an “electric bike.”

“These gas prices are crazy. I filled my truck up and got five gallons of gas to mow grass with and it cost $112. And it’s going up,” said Adams.

Instead of taking his truck to work on May 23, Adams rode his 26-inch electric bike from his home at Payne Gap to 185 Circle Drive in Whitesburg. Neil Collins, a student at Letcher County Central High School, rode beside Adams on a 20- inch electric bike. An electric bike is a bicycle which can be pedaled but also operated with a battery-powered motor.

Adams said it takes him about 20 minutes to bike to work.

“You can ride on the shoulder of the new road. There is a lot of room to ride bikes,” he said. 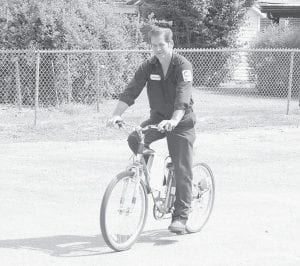 Randall Adams, a diesel mechanics instructor at the Letcher County Vocational School, started riding his electric bicycle to work last week to save money he would normally spend on gas. (Photo by Sally Barto)

If Adams gets tired of pedaling, the bike can run on a 24-volt gell cell battery which he says costs about a penny a day to charge.

“As you go up a hill you can assist it with an electric motor to get more power,” said Adams. “This electric bike makes it easy to keep in shape because if you get tired you can ride it like a motorcycle.”

“It’s no faster than a 10-speed bike. You can actually go faster pedaling,” he said.

He said he may retire from teaching diesel mechanics after this next school year and would like to start making electric bikes.

“I plan on making those bikes. I know I can make one better than that,” said Adams.

“It’s so cool and the air tastes so good. You see things you wouldn’t

Adams would like for more people to ride bicycles instead of driving automobiles because of high gas prices.

He is afraid gas prices will soon reach $4 a gallon. He remembers when gas prices used to be a lot less.

“When I was a kid I worked at Dad’s Gulf station in Haymond and pumped gas in cars for 23 cents a gallon and customers were complaining about the price,” said Adams, who is the son of Joe and Gladys Adams of Seco.

Stan Dixon, a counselor at the vocational school, agrees that riding a bicycle to work has its benefits.

“With gas the way it is, we are going to have to do something,” said Wanda Webb, secretary at the vocational school.

Barbara Ison, principal of the vocational school, said she wasn’t expecting Adams to show up at work riding a bicycle.

“The bike was really a surprise. He’s generally up for a challenge,” she said.

Adams said last week was just the beginning of a long summer of riding his bicycle.

“I plan on riding it everywhere I can,” he said.