Teacher’s bond set at $250,000 cash after his arrest on sex-related charges 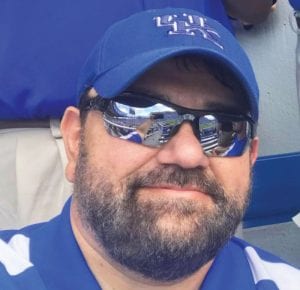 Charles E. Hall as he appears in a profile picture on the Facebook social media site.

A teacher and former consultant with the Kentucky Department of Education is in jail with bail set at $250,000 cash after being arrested Friday for allegedly having sex with a 14-year-old female student.

Charles Evans Hall, 45, of Jackhorn, is charged with third-degree rape, prohibited use of an electronic device to procure a minor for sex offenses, first-degree sexual abuse and third-degree sodomy.

Hall, a teacher at the Letcher County Alternative School and a former assistant football coach at Letcher County Central High School, was a teacher at Letcher Middle School when he was suspended last spring pending an investigation, but a KSP Post 13 investigation of that incident lapsed. Both police and the school district said at the time that the allegations were unsubstantiated, and sources say Hall was reinstated at the alternative school.

Letcher County Schools Superintendent Denise Yonts, who took over November 16 after the retirement of Superintendent Tony Sergent, declined to comment on whether Hall is still employed by the district, or whether he has been suspended, though he is being held in the Letcher County Jail. Board of Education Chairman Will Smith could not be reached and did not return messages left on his answering machine.

The Kentucky Education Professional Standard’s Board lists Hall’s credentials as a social studies teacher as good until June 30, 2019. A spokeswoman for the agency did not comment, instead referring a reporter to an open records request.

The Mountain Eagle reported last week that a teacher was under investigation by The Kentucky State Police Electronic Crimes Branch and the Internet Crimes Against Children Task Force, but did not name the teacher because charges had not been filed. The girl was not named because The Mountain Eagle does not identify sex crimes victims.

Kentucky State Police arrested Hall Friday at a residence at Jackhorn and booked him into the Letcher County Jail at 4:39 p.m. that afternoon. He remained in jail late Tuesday.

The arrest warrant state police served on Hall says that during the period from April 1 to November 29 of this year, Hall began texting and sending messages via Snapchat to a student “in a graphic manner, with intent to induce her to engage in prohibited sexual activity.”

According to documents obtained by The Mountain Eagle last week, the latest incidents were reported to Kentucky State Police about two weeks ago by the mother of the girl, who said her older daughter had seen explicit pictures of sex acts on the Snapchat account on the now 15-yearold’s cell phone. One of the photos included the face of a man the older daughter identified as Hall. The texts purportedly included discussions of past sexual acts. Police say they interviewed both girls and Hall, and seized the teacher’s cell phone after he refused to give them the pass code, or let them see the contents of his Snapchat account.

Police have now obtained search warrants to open and search the memories of two cell phones, and to obtain information from Snapchat.

According to search warrants, the girl told police that she and Hall had sexual intercourse during the 2018 Mountain Heritage Festival in the teacher’s car while it was parked in the woods. The girl told police there had been earlier allegations that she denied at the time, and after the investigation was dropped she and Hall resumed their relationship using Snapchat. The teacher has been accused of sex offenses against students in the past but allegations were never proved. This is the first time that court documents have surfaced alleging that photographic evidence of a liaison exists.

Hall was arraigned on the four charges against him Monday afternoon. He is scheduled to appear at a preliminary hearing on December 10 at 1:30 p.m. before Letcher District Judge Kevin Mullins. Mullins left the large cash bond intact after Hall’s initial court appearance on Monday.