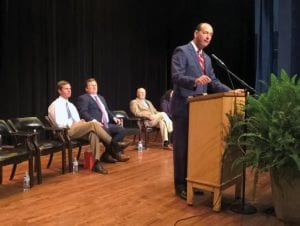 Beshear said in Whitesburg Tuesday that the bill approved by the legislature on a mostly party-line vote violates the inviolable contract with teachers in at least 15 different ways. His office is still analyzing the effects.

“This evening, if Gov. Bevin signs that pension bill, or tomorrow if it becomes law overnight, I am filing suit,” Bevin told an audience of several hundred teachers in the Letcher County Central High School auditorium.

Schools here will likely be closed on Friday. While a decision hasn’t officially been made, Letcher County

Schools Superintendent Tony Sergent said there have been so many teachers who have called in sick that day that he is not sure there are enough substitutes to keep schools open.

Beshear said he would “fight till my dying breath” to overturn the law. He is seeking an injunction to prevent the law from taking effect, and said he will then push to get the law into court as quickly as possible so it can be overturned.

Beshear said the state Constitution requires bills to be read three times on three separate days, but instead Republican leadership attached the pension bill to a sewage bill that had already had two readings.

“What they did here was give a sewage two readings and at the last moment pull out 11 pages, put in 291 pages, claim it’s had those two readings and pass it through,” Beshear said. “I don’t know about you all, but that doesn’t sound like it fits the Constitution at all.”

Beshear, state House Mi- nority Leader Rocky Adkins (D-Sandy Hook), State Sen. Johnny Ray Turner (D-Drift) and State Rep. Angie Hatton (D-Whitesburg) rallied the teachers during a swing through eastern Kentucky, promising educators that they will stand behind them, and giving Bevin, who has engaged in insults against teachers for months, a taste of his own medicine.

Beshear called the bill, “the worst of the worst” in government, but told teachers they were the “best of the best.”

“I have been in what I think you call a toxic environment in Frankfort for a few years,” Beshear told teachers. “The governor started calling me names about a year before he started calling everybody else names, but I’m getting pretty used to it.

Adkins, who is a former teacher and the son of a schoolteacher, boomed out a rapid-fire speech, at one point calling Bevin “disgusting.”

“I know schoolteachers. I was raised by them, and I know this for a fact: You’re not ignorant, you are well informed, you are not overpaid, and I can tell you this right now, you don’t have a thug mentality,” Adkins said, quoting some of the things Bevin has said about teachers.

Adkins said teachers, firefighters, police officers and other public employees deserve respect because they have “the awesome responsibility” of helping mould children’s lives.

Turner, a teacher for 28 years, said the consultants hired by Bevin who brought the governor’s proposal to the legislature last September never answered his question about what it would do to public education because it would have destroyed it. The bill that passed was not as draconian as what the governor asked for, but Turner said it was still too much.

“I was against this bill. It was wrong,” Turner said. “It was wrong what they did to people.”

Hatton also tore into Bevin, telling teachers they have to keep fighting.

“I know what the governor’s problem is,” she said, turning to Beshear.

“You mean there’s just one?” he asked.

Hatton and Adkins said the revenue bill vetoed by the governor last week because it did not go far enough was actually a tax cut for the rich, and would have cost the state more money than it brought in while shifting costs to the poor. They expect Bevin to call a special session to address a different bill more to his liking.

Asked after the meeting if he thinks the pension bill was an attempt to weaken public education in favor of charter schools, another of the governor’s initiatives, Beshear said, “I believe the current administration would prefer private companies run all of Kentucky’s schools.”

A teacher in the audience from Hazard asked during a question and answer session whether it is illegal for teachers to strike. Beshear told him that is the law.

“I can’t tell you to do it because I am the Attorney General and it’s against the law,” he said. “But the way things are right now, I can’t imagine there’s a prosecutor in this state that would take that case.”