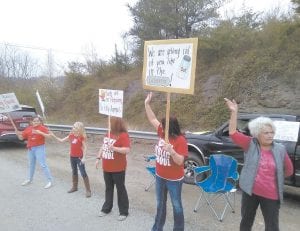 Teachers lined up along the Whitesburg Bypass this week to protest state Senate Bill 1, which would drastically cut teacher pensions.

Teachers and other school employees crowded onto the shoulder of the road and into the truck pull off to gather support and raise awareness, while drivers honked their horns as they passed.

At issue is a bill before the state legislature that would significantly reduce teacher retirement benefits.

Senate Bill 1 would cut annual cost of living increases for retirees to 0.75 percent from 1.5 percent for the next 12 years, increase the retirement age, and move teachers with less than 20 years experience into a new plan that would cut defined benefits in half and replace it with a 401K type plan. The bill would also eliminate the use of sick days toward retirement.

Teachers marched on Frankfort March 12, and plan to continue protests to stop the bill.

And while teachers aren’t happy with the legislature, they saved the most pointed remarks for Gov. Matt Bevin, who on a western Kentucky radio show last week called them “selfish and shortsighted,” and said they were “uninformed” about the bill.

“ If a person is uninformed about a topic, they’re not even able to make their own case for what they believe in,” Bevin said. “There’s an old saying that you can’t win an argument with an ignorant person.”

Signs along the Whitesburg bypass called Bevin out as a “Grinch” and said teachers would “slam dunk” Bevin out of Kentucky.

“Why are we considered ignorant? According to recent statements I and all my fellow brethren are ignorant,” Letcher County Teachers Organization President Regina Brown said. “I would assume we are considered ignorant because we disagree with someone else’s opinion.”

Regina Brown said in an open letter to legislators and Bevin that state officials have refused to show them actuarial reports that prove the pension system is in as much trouble as Bevin and Republican leaders claim.

“In addition, we have offered on many different occasions to sit down and work on the pension issue but our elected representatives are unwilling to bend or compromise their proposal,” Brown said. “They refuse to accept any different ideas or solutions as to how to best ‘fix’ the pension systems, fund education, and all other state programs.”