Teacher’s son not your average recruit

Kentucky is one of the schools pursuing 6-9 junior Jarred Vanderbilt, who is only 16 years old and ranked as one of the top 10 recruits in the 2017 recruiting class.

“He’s going to be really special at the next level,” Victory Prep (Texas) coach Rodney McCray, a former Louisville and NBA star, said.

Vanderbilt has already played at three venues in Kentucky this season and will be back again Feb. 6-7 to play games at Pulaski County in the Thoroughbred Classic that will also feature another of the nation’s top juniors, 7-foot DeAndre Ayton of Arizona Hillcrest. He is also being pursued by Kentucky.

I caught up with Vanderbilt during Mustang Madness and he talked about a variety of things. Here’s some of what he had to say leading into the games he’ll play back in Kentucky February 6-7. He’ll go against Ayton, who had 52 points, 33 rebounds and 10 blocks, at 9 p.m. on February 6 and then face Huntington Prep at 1:30 p.m. February 7. 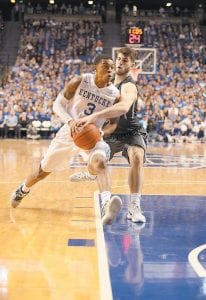 DISRESPECTED — Tyler Ulis has seven games in which he has scored 20 or more points. He also has more than 100 assists this season, but ESPN analyst Dan Dakich continues to taunt UK fans by saying Ulis is not one of the nation’s top five point guards. (Photo by Vicky Graff )

Question: What has it been like to play in Lexington, Marshall County and now at the McCracken County Mustang Madness in Paducah?

Vanderbilt: “It has been fascinating. Every time I come here they welcome you with warm arms and always support you. It is a great pleasure to play in Kentucky.”

Question: Do you think a lot of the fans are hoping you will play your college basketball at Kentucky?

Vanderbilt: “All the time they refer to it and coming to Big Blue. I don’t mind that. It is nice. It shows that they really want me here, and I like that. The fans are very passionate about basketball here.”

Question: What is there about coach John Calipari that you like?

Question: Does it fascinate you that he can bring in so many new players each year and yet continues to win big?

Vanderbilt: “Absolutely. Any time you can bring four or five new guys every year and still be at the top of the crop is just amazing.’

Question: How do you stand in recruiting right now?

Vanderbilt: “I am still taking my time. I haven’t cut the list down yet. Recruitment is still open for me. I will cut down near AAU ball maybe near Peach Jam.”

Question: What was it like playing with UK signee De’Aaron Fox last summer?

Question: Do you really have a 4.3 grade-point average with all the basketball activity you have?

Vanderbilt: “I make time for it. It is mandatory for me. I am a student-athlete, so academics always come first. That is just another goal that I want to be an engineer or getting a doctorate. I always take education seriously, even before basketball.”

Question: Is that because your mother is a teacher?

Vanderbilt: “That has something to do with it. She kind of instilled that in me at an early age and I just stuck with it. Before I would go outside to hoop when I was young, I had to make sure I got my homework done. If I had trips or games, she was on me to finish my work before I could go.”

Question: What about your track background?

Vanderbilt: “I ran the 100 (-meter dash) and 200. I stopped doing it because basketball is year round and I don’t really have time to do multiple sports. I could run pretty fast.”

Question: Do you play a few musical instruments?

Vanderbilt: “I used to play percussion. I played drums, bells, xylophone and all that. My middle school was a magnet school, so they taught us how to play instruments and do all that arts and stuff. I was in the marching band. Playing percussion in the band helped your coordination and all that stuff. All my activities I did when I was younger helped me and I utilize those skills now. I am glad I did do that at young age.”

Question: Do you realize that wanting to be an engineer, having over a 4.0 grade-point average and a musical background is not that normal profile for a top basketball recruit?

Vanderbilt: “I do have people seem surprised because not the average basketball player has those attributes. It is unique.”

Want to know how frustrating this season has been at times for Calipari? Well, he’s having to teach during game-day shootarounds.

“It wears you out. It tires you out. Like you just can’t stand there and watch. You have to – and you can’t let them just play like the way they want to play. You have to stop them because if you let them do what they want to do, you cannot win. You’re not winning,” Calipari said.

He says a shootaround can last 30 minutes if all goes well. Like just bang, bang, bang, they know it, we got it, you ready. ‘Alright, let’s go do this.’ And we all know we’re going to play great. Then I’ve had them before which are like 50-minute, 55-minute shootaround, that I’m exhausted when I leave the court,” Calipari said.

He Really Is Anti-UK

Every media member is entitled to his or her opinion. Even when I disagree, I respect another media member’s opinion when I feel it is based on some type of logic and intelligence. Then there is ESPN so-called analyst Dan Dakich. He’s anti-UK. Always has been and always will be going back to his playing days at Indiana. He also tries to be a bully as I found out at the 2014 NCAA Tournament when he disagreed with something I said and try to be a macho man on press row.

But no way he can really believe what he said about Tyler Ulis is not even a top five point guard in the country and says no Kentucky fan even believes that. Are you kidding me? He even got into a Twitter battle with Kyle Tucker, beat writer for the Louisville Courier-Journal, about Ulis after the sophomore point guard had 21 points and five assists in Saturday’s win over Vanderbilt.

Either Dakich is clueless or just loves provoking UK fans. Myself, I think he’s both and often wonder why ESPN puts up with him.

Kentucky is the only SEC team with two Thursday-Saturday turnarounds on its schedule this year but started out well by winning at Arkansas and then smacking Vanderbilt. Next UK will host Tennessee February 18 before playing at Texas A&M on February 20. Texas A&M leads the SEC and is considered the the league favorite.“It’s easier, in my opinion, when you go home-to-away than when you go away-to-home,” ESPN analyst Seth Greenberg said. “The players can get a good night’s sleep and practice at home the next day before traveling to the second game sit. Sort of stay in your routine. But either way it is not easy.”

Greenberg gave an honest assessment on UK’s team to date.

“I don’t like their chemistry, right now, and that makes it tough. Their shooters don’t defend. Their defenders don’t really make shots,” Greenberg said.

He was right. But to his credit, he reminded everyone how two years ago UK lost four of its final seven regular-season games and still made the national title game. “It’s only January,” Greenberg said. “We’ve seen (Calipari) flip the switch in February.”

And to Greenberg’s credit, after UK beat Arkansas and Vanderbilt in a 48-hour period he said we may have seen the start of that switch getting flipped.

Now comes a real chance for UK to show nationally that the switch has been flipped when it plays at Kansas this Saturday. ESPN GameDay will be there and why it is not a must-win for UK, it could sure be a statement game for Calipari’s Cats.

Florida junior quarterback Mac Jones was UK’s first commitment in the 2017 recruiting class and has impressed new quarterbacks coach Darrin Hinshaw since the coach got to UK from Cincinnati. However, three 2016 UK in-state commits — Drake Jackson, Kash Daniel and Landon Young — have all obviously had a big impact on Jones.

“I bought my first pair of boots today. I guess you can call me @ The_ Drake_ 52, @Landon_ Young or @KashDaniel,” Jones posted on Twitter.

To borrow a phrase from Calipari, that’s called the Kentucky Effect.