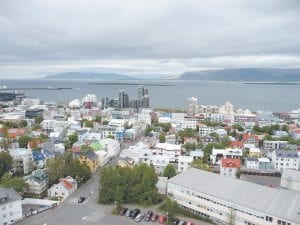 Pictured above is Reykjavik, Iceland as photographed by Dillion Asher. Pictured at right is the commemorative statue of Leif Eriksson and the steeple of Hallgrimmskirkja Church, from where Asher and his girlfriend, Lisa Brignoni viewed “mountains of volcanic origin, wisps of steam from distant geysers, broad and expansive plains formed by lava flows and numerous fjords and inlets to the ocean.”

As reported in last week’s edition of The Mountain Eagle, Whitesburg native Dillion Asher is in Europe with girlfriend Lisa Brignoni preparing for a 9,000-mile road rally from England to Mongolia. Asher will check in with Eagle readers during the journey. The Mongol Rally begins July 13.

Lisa and myself left Whitesburg for Baltimore on June 13, and spent the morning of the 14th touring the sloopof war U.S.S. Constellation in Baltimore Harbor before leaving to visit her family in Malta, N.Y. The Constellation was a beautiful old ship, an amazing example of human ingenuity during the age of sail and a part of American history I was happy to see before setting off for the Mongol Rally.

On the 17th, Lisa was kind enough to drive me to Saratoga National Battlefield, just 12 miles from her hometown. It’s funny but in the face of a two-month-long trip across Europe and Asia I wanted to see as much of my own country as I could with the time I had, to understand what is that makes us unique in the world and to know just how we came to be. The battle of Saratoga may well be that place in time, a pivotal conflict that foiled a British invasion from Canada, secured France’s international recognition of the United States government and French military support during our war for independence. 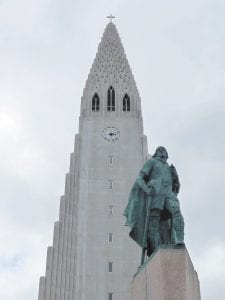 On June 22, we left JFK airport in New York City for Keflavik Airport in Iceland, where we’ll remain until June 26. At this point we are still three weeks from the Mongol Rally start date and are essentially camping our way to England, Iceland being a four-day layover prior to landing in Europe.

We arrived at 11:30 p.m. local time, the sun still hovering just above the horizon, and boarded a bus for the 45-minute ride to the capital, Reykjavik. We rented a small patch of grass at a local campsite and attempted to sleep in our small tent under the endless daylight of summer so near the Arctic Circle.

On the mornings of the 23rd and 24th, we walked to downtown Reykjavik, admired the city’s architecture and toured a number of the country’s museums. We learned about the early settlement of Iceland, dating back to 871 A.D., the development of the local fishing industries and vibrant maritime heritage, as well as the unique language and culture that have all come to define modern Iceland.

The country is clean, neat and exceedingly well maintained, and the people friendly and hospitable (and all of them English speakers, much to our relief ). The landscape is largely treeless, but is covered by a variety of grasses, mosses and lichens that give it a green hue.

We visited the commemorative statue of Leif Eriksson and the steeple of Hallgrimmskirkja Church for a better view. From there we could see mountains of volcanic origin, wisps of steam from distant geysers, broad and expansive plains formed by lava flows and numerous fjords and inlets to the ocean. We have just one more day before we pack up our campsite and board a flight to The Netherlands and mainland Europe. From there we go to England and make final preparations for a long journey eastward, expecting arrival in Mongolia on or around August 23.