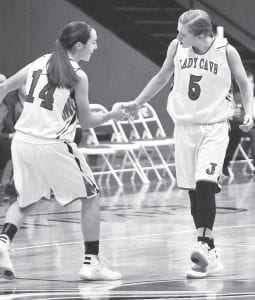 Jenkins Lady Cavliers teammates Alexis Stambaugh (14) and Whitney Creech (5) are among Kentucky’s statistical leaders through 18 games of girls’ high school basketball. According to the website MaxPreps, Stambaugh, a senior forward, leads all Kentucky girls in blocked shots, having swatted away 75 attempted shots for a 4.2 per game average. Creech is third statewide in blocked shots with a total of 46, says MaxPreps. According to the latest statistics released by the Kentucky High School Athletics Association, Creech still leads all Kentucky girls in scoring, with a per-game average of 51.4 points. Creech also leads the state in rebounding, collecting 276 on the season for a 16.2 per-game average in 17 games. As a team, the Lady Cavaliers are second in the state in free throw shooting percentage, having made 245 of 323 attempts in 18 games to average 75.9 percent. Elizabethtown High School is the state’s best free throw shooting team, averaging 77.2 percent from the line. (Photo by Chris Anderson)