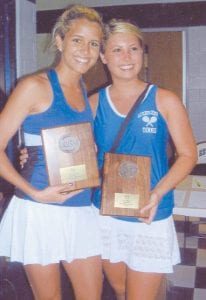 Justin Pridemore and Josh Profit teamed up to take the 14th Regional doubles title, with Tyler Bailey and Jake Raleigh finished in second place. These players along with Tyler Smith and Ethan Raleigh will play in the state tennis tournament tomorrow (Thursday). The Cougars finished the year with a 9-1 record and have a 19-2 record over the last two years. They are coached by A.H. Holbrook.

Allie Combs and Hayley Kincaid took the girls’ doubles title in the 14th Region. They will also be playing in the state tournament. The girls’ tennis team includes Destine Kincer, Brittney Wells, Seira Bates, Kristin Blair, Erica Meade, and Samantha Mullins. The girls’ team finished the season with a 7-2 record and a 12-6 record over the last two seasons.