Teams face off in Hindman 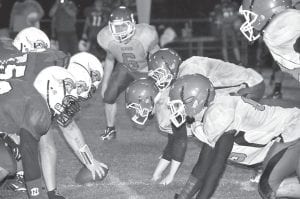 The Knott Central offense and Jenkins defense faced off late in the game during the Cavaliers’ 28- 21 loss to at Hindman. Turnovers, including four fumbles in the first half, doomed Jenkins. The loss drops the Cavs’ record to 4-2 on the season as the team enters its district schedule this week against the 3-3 Pineville Mountain Lions on the Jenkins field. The loss also ended a long 36-game losing streak for the Patriots in circumstances similar to last season when Jenkins defeated Knott Central to end its own losing streak which had spanned several seasons. (Photo by Chris Anderson)