By JONATHAN MATTISE
The Associated Press 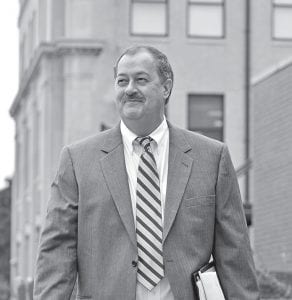 Choking back tears, a former coal miner testified Tuesday that during Don Blankenship’s reign atop Massey Energy, a “code of silence” about safety dangers persisted at a West Virginia mine where an explosion killed 29 men in 2010.

On the stand for Blankenship’s criminal trial, Stanley “Goose” Stewart said Upper Big Branch miners feared they would be fired or harassed into quitting if they spoke up about the mine’s deficiencies. He said miners were ordered by management to cheat to make the mine seem well-ventilated, even though it was often riddled with explosive methane and coal dust, which also causes black lung disease.

“The company wanted to mine if you had insufficient air or no air,” Stewart said. “You load, or go home.”

Blankenship is charged with conspiring to break mine safety laws at Upper Big Branch in West Virginia and lying to financial regulators about company safety. Twenty-nine men died in the Upper Big Branch explosion, the deadliest mine accident in four decades.

Stewart testified about safety issues to a congressional panel in 2010. During that testimony, he recalled that he was 300 feet underground when a fireball tore through the mine following the explosion. He said methane gas and dust clouded the mine.

On Tuesday, Stewart teared up when U.S. Attorney Booth Goodwin asked him why he decided to testify to Congress.

“I felt like the truth needed to be told,” Stewart said in the most emotional moment in the trial to date.

Asked about several ventilation reports that said enough air was flowing while he worked there, Stewart said he knew not all the reports were truthful.

Stewart said federal inspectors who were aware of the fear miners had about discussing problems told them to mention where to look for issues as the inspectors passed by. The system let miners avoid being caught tipping off inspectors.

Blankenship’s attorneys contend that he was a divisive figure and a pushy boss who cared about money, but they said he still ordered that safety come first.

Stewart was one of several former miners and supervisors to testify about poor safety at Upper Big Branch. More key members of Massey management are expected to take the stand soon. The trial began Oct. 1 with four full days of jury selection.