The most difficult item to assemble at the new NASCAR Hall of Fame wasn’t one of the mesmerizing touchscreens and interactive displays, but Junior Johnson’s rebuilt moonshine still from yesteryear.

The problem was only solved with the help of an expert. A call was placed and Johnson, one of NASCAR’s pioneers and a member of this month’s first Hall of Fame class, gathered his tools, drove into town and did the job himself.

“That’s like Babe Ruth designing, building and installing one of the first exhibits in Cooperstown,” NASCAR Hall of Fame director Winston Kelley said

Johnson’s still, celebrating the birth of the sport by bootleggers such as himself outrunning the police in souped-up cars, is one of the featured items at this $195 million facility which opened Tuesday. So is Red Byron’s 1939 Ford, which won NASCAR’s first race, and Richard Petty’s recordbreaking blue Plymouth. 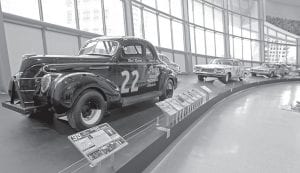 Red Byron’s 1939 Ford, winner of NASCAR’s first race, is seen on Glory Road near the entrance to the NASCAR Hall of Fame in Charlotte, N.C. (AP Photo)

While there was a steady stream of folks like Johnson willing to go to extremes to contribute to this stock car racing shrine in downtown Charlotte, it’s much more than just old cars and firesuits.

Those old-time exhibits can even get overshadowed in the sensory overload of 154 video screens, racing simulators and pit crew activities.

This is clearly a 21st century hall of fame.

“We wanted to have the most interactive, technologically advanced hall of fame in sports,” NASCAR executive Blake Davidson said. “I think we’ve achieved that.”

The technology is the most striking element as you enter this 150,000-squarefoot building. You’re immediately whisked into a theater with a 64-foot wraparound high-definition screen that shows a cheery 12-minute history of the sport.

You’re then directed to use your “hard card” to enter information on touchscreens that will identify you later when you jack a car or try to stay off the wall at Darlington in a race simulator. After you’ve attempted to stay on your feet standing on a replica of the steep 33-degree banking at Talladega, you can walk through a race hauler, sit in a car and pick an on-demand video of your favorite close finish.

Even the busts of Hall of Famers made familiar by the baseball and football halls are passé here. The first class of inductees — drivers Johnson, Petty and Dale Earnhardt and executives Bill France Sr. and Bill France Jr. — will have seven-foot spires that include two likenesses and imbedded video.

“In Dale Earnhardt’s exhibit, you’ll know he was an outdoorsman,” Kelley said. “You’re wanting to tell the personal story as well as the racetrack story.”

While there are other motorsports museums, the first one sanctioned by NASCAR got much of the good stuff. The 1967 Plymouth that Petty drove to a record 27 victories, including 10 straight, is here. So is Earnhardt’s No. 3 Chevrolet from 1996 and Cale Yarborough’s 1977 Oldsmobile. They’re among 18 cars parked on Glory Road, a banked track replica that’s the first thing you see as you enter the building from the checkered flag crosswalks outside.

“Really this is beyond any dream we could have had,” said NASCAR’s Davidson. “From every aspect of it it’s really met every expectation.”

The Hall of Fame covers, at least partially, most of NASCAR’s history — even its moonshine roots and driver deaths on the track.

The thick accident report from Earnhardt’s fatal lastlap crash at the 2001 Daytona 500 is on display, part of a section that highlights the safety advances made since his death.

“He’s got an incredible legacy as one of the best drivers that’s ever driven a race car,” Kelley said. “But his other legacy is the impact that his accident had. It was actually NASCAR’s idea to show the accident report.”

But the Hall also has a strikingly small display labeled “diversity.” Pictures of a handful of the few minority and female drivers are tucked away in a corner, a reminder of the sport’s nearly all-male, all-white past. NASCAR chose Charlotte, the often staid banking city in the heart of stock car country, over Atlanta, Richmond, Va., Daytona Beach, Fla., and Kansas City, Kan., as the spot to honor the sport’s six-decade history and growth from its Southern base to a national sport.

Admission is $19.95, with discounts for children 12 and younger, seniors 60 and older and military members. Yearly memberships are also available. A portion of the profits will go to NASCAR, the sport’s sanctioning body.

The Charlotte area, home to about 90 percent of NASTh CAR’s teams, hopes the Hall’s addition downtown will make the city a destination for conventions and vacationing families.

Already, the National Rifle Association expects to bring a city-record 70,000 people for a convention this month. The group will use the adjacent 40,000-square foot ballroom. The first tour group coming to see the Hall is from Canada.

The Hall’s opening and May 23 induction ceremony coincide with this month’s races at nearby Charlotte Motor Speedway. It’s when city officials estimate a good chunk of the estimated 800,000 first-year visitors will come.

The challenge is getting fans to return and make the city-owned building profitable. It’s why displays will be rotated, cars replaced, interactive displays changed and a new induction class enshrined each year.

“One of the things we preached in every single meeting was sustainability and refreshing the facility,” Davidson said.

That job went to Ralph Appelbaum, whose New York-based company designed the layout and displays. And while a good chunk of the facility will honor the sport’s past, there is an emphasis on getting adults and children to experience what it’s like to be a driver, crew chief or pit crew member in hopes of collecting repeat customers. “It’s not just a compilation of winning track footage,” Appelbaum said. “What this gets you engaged with is how engines and cars are designed, built, engineered. It takes you deep into a whole set of challenges that our children can really connect to.”