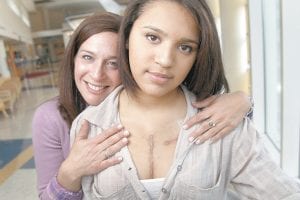 Courtney Montgomery, right, and her mother Michelle Mescall posed together recently at Duke University Medical Center in Durham, N.C. After refusing a heart transplant, Courtney met another teen who’d just had one and was doing well. (AP Photo)

Courtney Montgomery’s heart was failing fast, but the 16-year-old furiously refused when her doctors, and her mother, urged a transplant.

Previous surgeri e s hadn’t helped and the North Carolina girl didn’t believe this scarier operation would either. It would take another teen who’s thriving with a new heart to change her mind.

Teenagers can add complex psychology to organ transplantation: Even though they’re minors, they need to be on board with a transplant because it’s up to them to take care of their new organ. Depression, anger and normal adolescent pangs — that tug-of-war with parents, trying to fit in — can interfere. It’s not just a question of having the transplant, but how motivated they are to stick with anti-rejection treatment for years to come.

“ The decision-making process that we go through, in terms of our ability to weigh factors in a rational sense, probably doesn’t mature until you’re in your late 20s,” says Dr. Robert Jaquiss, pediatric heart surgery chief at Duke University Medical Center, where Courtney eventually was transplanted. “It introduces an enormous level of complexity to caring for these kids.”

Then there’s the sense of isolation. Far fewer adolescents than older adults undergo an organ transplant, making it unlikely that a teen has ever seen how fast their peers can bounce back.

Between 700 and 800 adolescents, ages 11 to 17, have some type of organ transplant each year. That’s nearly 40 percent of the roughly 2,000 annual pediatric transplants. Teens fare better than any other age — child or adult — the first year after surgery. But long-term, adolescents do a bit worse than younger children, and the reason isn’t biological, Jaquiss says. It’s that teens, and young adults as well, tend to start slipping on all the required follow-up care.

One study found up to 40 percent of adolescent liver recipients eventually miss medication doses or checkups. It can be normal development, as teens start sleeping late and simply forgetting morning doses, or sometimes it’s rebelliousness. Then there are medication side effects that Jaquiss says can be especially troubling to this imageconscious age group: weight gain, acne and unwanted hair growth.

And at the Children’s Hospital of Pittsburgh, separate research with heart recipients has found chronological age is unrelated to “medical maturity.” Young patients who had a hard avoided family discussion of problems, for example, were less likely to stick with care.

Courtney’s mother, Michelle Mescall, said that when the medical center advised that her daughter needed to agree to go on the transplant waiting list, “I said, ‘Well she’s a minor, what do you mean? I’m going to make this decision.’ I was just floored that it was now her decision.”

Legally, the hospital could have proceeded with mom’s OK. But clinical social worker Shani Foy-Watson says if that happened, Courtney’s resentment could have torpedoed her recovery, setting up just those kinds of problems with followup care.

Foy-Watson says it’s not unusual for kids who’ve lived with serious illness for years to have a hard time imagining normalcy — at the same age when it’s normal to seek more independence from their terrified parents.

Courtney, of Asheville, N.C., was diagnosed at age 8 with hypertrophic cardiomyopathy, a thickened and hard-to-pump heart that’s the leading cause of sudden death in young athletes. Her mother tried to shield her from doctors’ death warnings, but says Courtney became anxious and depressed early on.

She had a defibrillator implanted and later heart surgery that offered only temporary relief, fueling resentment of her mother’s medical choices. Courtney eventually had to give up her beloved cheerleading, and last year required homeschooling.

As a few weeks passed with Courtney still resisting a transplant, the social worker tried a new tack: A 17-year-old football player had received a new heart at Duke a few months earlier because of the same condition, and already was back at school in Raleigh. Would he meet with Courtney?

It was a gamble. No one told Josh Winstead, now 18, the reason for the meeting, and they might not have hit it off. But they did, and Courtney immediately changed her mind.

“I guess me doing what I do, being a kid, helped out the most,” says Winstead, who took Courtney to his prom a week before her surgery. “It was more just showing her how normal my life is.”

You hear all the advice from friends and doctors, Courtney says, “but it doesn’t hit home like when Josh would tell me, ‘I have the same scars you do and this is how it felt and this is how I feel now.’”

She got her new heart last month. She’s recovering well and exercising in hopes of getting back to the cheerleading squad.

Her mother’s helping Courtney learn to handle a whopping 33 pills a day, and is proud of how her daughter has rallied: “I’m just dealing with how to let go and let her fly, but also be the parent of a 16-year-old.”