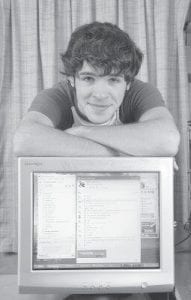 INSTANT MESSENGER – Lewis Grove, 19, leaned on his computer monitor at his home in Heath, Ohio, recently. Grove has used instant messages to arrange dates and to break-up with girlfriends. (AP Photo/Timothy E. Black)

Sure, instant messaging is fast and efficient. For many teenagers, it’s also a great way to avoid those OMG moments – that’s “omigod” – of mortifying faceto face confrontations.

More than four in 10 teens, or 43 percent, who instant message use it for things they wouldn’t say in person, according to a new Associated Press-AOL poll. Twenty-two percent use IMs to ask people out on dates or accept them, and 13 percent use them to break up.

“If they freak out or something, you don’t see it,” said Cassy Hobert, 17, a high school senior from Frenchburg, Ky., and avid IMer who has used it to arrange dates. “And if I freak out, they don’t have to see it.”

Overall, nearly half of teens age 13 to 18 said they use instant messaging, those staccato, Internet-borne strings of realtime chatter often coupled with enough frenzied multitasking to fry the typical adult brain. Only about one in five adults said they use IMs – though usually with less technological aplomb or hormone driven social drama.

Danny Hitt, 34, a real estate agent in Riverside, Calif., says he has chatted with four or five IM buddies at once – a number some teens would consider embarrassingly low. He prefers the telephone for important communications.

“To me, a significant conversation takes a phone call,” Hitt said. “The inflection in the voice, you lose that” with instant messages.

Instant messaging’s lack of physical proximity is exactly the point for those determined to avoid cringe-inducing episodes.

Take Lewis Grove, 19, a college sophomore from Heath, Ohio, who said he has used instant messages for both ends of the dating cycle.

“Fear of rejection – if you’re face to face, you can’t close out the window and disappear if you’ve been rejected” like you could if you were instant messaging, he said.

Grove said the IM breakup has its advantages, too.

“I’ve had some crazy ex-girlfriends. Saying that in person would probably not be the best idea for my physical safety,” he said.

Among teenagers, about half of girls and more than a third of boys said they have used instant messages for things they wouldn’t say in person.

Teens do not have sole rights to using instant messages for their personal lives. About eight in 10 adults who IM use it to send personal messages from work. About half of adult IMers say they log on to IM at least daily – slightly below the percentage of teens who do so that often.

Yet comparing the use and technical sophistication of instant messaging by teens and adults, while not quite like comparing Einstein to a walnut, is pretty one-sided.

Teens are far more likely to use many of the bells and whistles that have pushed IM programs well beyond the simple text message. They are at least twice as likely as adults to send IMs to a friend’s phone, and to use them to share music or video files or to listen to music.

They also are more likely than adults to use IM to chat with more than one person at a time, and to send photos or document files.