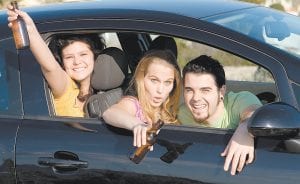 RISKIER BUSINESS — Teen-agers who don’t get enough sleep, or get too much sleep, often take dangerous risks that other teens do not, says a new government study by the Centers for Disease Control and Prevention.

High school students who get too little sleep — or too much — are also more likely to drive drunk or take other risks, according to government researchers.

The scientists say they don’t know if sleep issues cause teens to take dangerous risks, or whether both are a reflection of depression or other problems. But the link between sleep and injury-causing risks is striking — especially when it comes to drinking and driving, said the study’s lead author, Anne Wheaton of the Centers for Disease Control and Prevention.

“I thought that was really, really surprising and just really worrying,” she said.

Students who get only five or six hours a night were twice as likely to say they’d driven while drinking in the previous month, compared to kids who regularly got a full night’s sleep. That was also true of kids who got 10 or more hours per night, compared to the regular sleepers, the researchers found.

Too-little sleep is very common, and too-much sleep is pretty rare. About 69 out of 100 high school students get insufficient sleep — defined as seven hours of sleep or less on average school night. About two out of every 100 get too much — 10 or more hours.

Previous research has found a link between insufficient sleep and injuries from car crashes, sports or workplace accidents.

The CDC investigators wanted to probe which students got proper sleep, and to see if it was related to which kids said they recently had decided not to wear seat belts or bike helmets, or were texting while driving, drinking while driving, or riding with a drunk driver.

For adults, the recommended amount of sleep is seven to nine hours each night. Previous CDC research suggests at least a third of adults get less than that.

Doctors offer tips for good sleeping that include sticking to a regular bedtime schedule, getting exercise each day and avoiding caffeine and nicotine at night. Parents are advised to keep kids away from TV, video or cell phone screens before bedtime.