Telemarketers are latest enemy in fight against drugs here 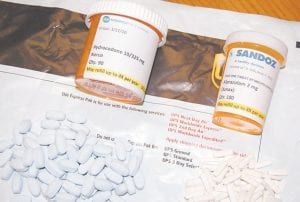 Sheriff ’s investigators were able to purchase the painkiller hydrocodone and the antianxiety pills Xanax from telemarketers. The pills arrived in the containers shown here.

Letcher County Sheriff Danny Webb said it is hard to fight the drug problem when people continue to come up with new ways to get pain pills into the county.

“Just when you think you’ve got an investigation going, it comes at you from another direction,” said Webb. “It’s hard to fight the battle when it is coming from all diff erent directions.”

Webb has recently worked cases where drug dealers take vanloads of people to see doctors in Florida and obtain large quantities of prescription narcotics to bring back to Letcher County and illegally sell to others.

Now out-of-state telemarketers are calling residents in Letcher County and asking them if they would like to purchase controlled substances over the phone and have them shipped to their mailing address as a bulk order. The recipient then pays the postal carrier cash or with a money order to receive packages.

“This is a new one,” said Webb. “It just shows how much people are taking advantage of addicts.”

Lt. Brian Damron with the sheriff ’s department said it was easy to call a business identifying itself as a pharmacy in Florida and place orders.

“As long as you have money they will send you pills and they do it via mail delivery,” said Damron. “These are places that claim to be a business that fill prescriptions and ship them out.”

After receiving information from a county resident about a telemarketer off ering drugs, Damron spent the last two months investigating the complaint by calling an alleged pharmacy in Florida and purchasing diff erent amounts of OxyContin, hydrocodone and Xanax.

“Whatever I wanted I could get,” said Damron. “I didn’t have to have a doctor referral, an x-ray or anything. We would make up names, addresses, dates of birth.”

Damron said he was able to obtain large amounts of pills from just phone calls. He placed one order for 5,000 OxyContin tablets.

“It is a devastating shock,” said Damron. “We have a big enough drug problem as it is.”

Damron said it appears that the pills did not meet U.S. standards and were possibly sent from Mexico. Some of the return addresses include Miami, Fla. and Texas.

Damron said the sheriff ’s department is concerned for those who have legitimate medical problems and may be vulnerable if telemarketers call and off er to ship them pain pills at a lower rate than what they are already paying for them.

“We’re concerned that not only could they be engaging in something illegal but they could be receiving medications not approved by the Food and Drug Administration,” said Webb. “To somebody that doesn’t have insurance it seems appealing.”

“This is a new twist on the drug war,” said Damron.