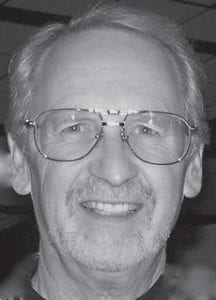 From Kyle Kuric at Louisville and Darius Miller at Kentucky to Ivan Aska at Murray State, who said his farewell last week, it’s the last roundup on home courts. Where did Father Time go?

This senior week at Kentucky is different — more sad than usual. An exodus to test severely the loyalty and passion in Big Blue Nation. A roster wipeout that saddens college basketball purists.

Two seniors, two freshmen and two sophomores could be playing their last regular season game at Rupp Arena this week.

Comets come by rarely. In football, a John Unitas. At the track, a Secretariat. In golf, a Jack Nicklaus. In UK Basketball, the comet is Davis.

As game clocks clicked down this winter, and because television makes Kentucky America’s team, fans everywhere got to see Davis. The rarity of what he brought cannot be overstated. Dunks and blocked shots and poised play, yes, but here was a teenager with gumption and stamina and role-model presence. • Once-upon-a-time a Chicago two-guard, No. 23 resurrected the blocked shot as a tool instead of a slam into the fifth row that redeems nothing. 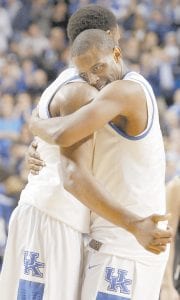 • Kentucky’s Mr. Long and Lean, the 6-10 Davis showed us a jump shot at the shot clock, a jump hook, slams from Mars, and my favorite, a falling down scoop shot prayer.

• Davis ignored the trash, weathered the punishment and played with dignity and devotion to team and game in a manner reminiscent of legendary Boston Celtics center Bill Russell.

• College player of the year? By a Cawood Ledford mile, it’s Davis.

All this said, freshman Anthony Davis will almost certainly be showing up in home whites for the last time at Rupp Arena on Thursday night, more than a week before his 19th birthday (born March 11, 1993). 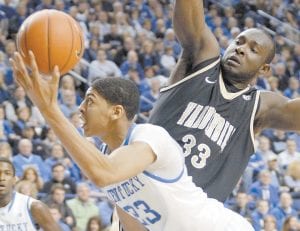 Between now and June, NBA general managers will stomp on each other’s faces for the chance to stuff millions into the hands of Davis.

Sound good? If making possible dreams-come-true-today for Davis’s family, yes. For those of us who’ve lived long enough to know, time is more precious than gold, no!

The seasons of being 18 to 22 are pinnacle ones. Time to be cool, sparkle, dream, have fun, see the new in everything and wise to put one foot in front of the other and not rush.

Anthony Davis is special. Barring injury, he is destined for greatness on a basketball court. Off it, when the ball stops bouncing, who knows?

What Kentuckians who love the game know for sure, gratitude that he came this way made himself a treasure to us in “our time.”

Hunch here says Darius Miller will have a thoroughbred kind of run during the post-season similar to one UK fans last witnessed in 1998 when at every critical moment senior Jeff Sheppard stepped up and led Kentucky to the national championship and was named MVP at the Final Four.

Miller, as he did against Vanderbilt and Ole Miss, shows an uncanny sense of timing in sticking a dagger (three ball) into an opponent to kill a run at the Wildcats.

What to watch for Thursday: When Miller and his parents step onto the Rupp Arena, who will cry first, the kid or his mother?

In part because Terrence Jones has adjusted to an Anthony Davis/ Michael Kidd-Gilchrist marquee this season, the 6-8 forward has almost certainly played himself down in the NBA draft first round.

Jones’s uneven play leaves pro general managers to wonder, “Will this kid give us our money’s worth 85 nights a season?”

Conclusion? With another batch of John Calipari one-anddone players on the way, wouldn’t it be interesting (and profitable) if Jones returned to Kentucky next season to be the team’s elder?