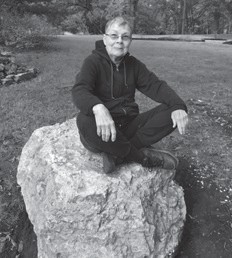 Sharron Kammerlohr of Warrensburg, Mo., niece of Johnny and Ann Calihan, is enjoying retirement and being home with her husband Art. Her brother, R.S. Tylor, is a subscriber to The Mountain Eagle.

Yes, it is officially fall, however that doesn’t mean I am ready for it. To me fall is such a short season, come November through spring is such a long time.

In a couple of weeks I am having the propane tank filled, as I have a tad bit left. With the predictions for the winter months ahead it will have to be filled a couple of times this year, as I can’t stand to be cold. If it doesn’t get warm in a day or so, I may be turning the heat on. At the present time it is supposed to drop into the 40s.

As I attempted to finish this column temperatures did drop to 43 in this area. No, I didn’t turn the heat on as the airconditioner is in the window and will probably be there for a few weeks.

When I walked into the bathroom and turned on the electric heater, thoughts came creeping of growing up in the mountains. Of the times of no inside plumbing, having to go to the little outhouse, which was called a toilet, no matter how cold or how much snow. Even though sometimes you waited as long as you could, you still had to make the trip. 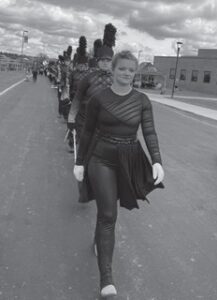 Katie Nottingham, drum major for the Beechwood Marching Tigers, is a senior and the daughter of Scott and Anna Nottingham.

Many a cold winter morning I’ve seen Mommy go to the kitchen, build a fire in the wood and coal stove as she prepared to fix breakfast for Daddy. There was always a bucket of water with a dipper sitting on a table, and the water would be frozen. Mommy would have to set the bucket on the stove to thaw before she could put water in a pan to wash her hands.

On wash days, after carrying water in the cold from a well, Mommy would wash the clothes and hang them on the line. At times the clothes would freeze dry.

Mommy never complained, no matter how hard she had to work, winter, summer, cold or hot weather.

Loretta Lynn had nothing on me as she relates to stories, along with hundreds of other children raised in the mountains, except Loretta Lynn had a lot of talent and someone to take an interest in her to help develop a better way of life.

Oh times were very hard during my childhood. I wouldn’t trade the memories of growing up in the Roxana area for anything. Even the rough times helped shape who I am today. Not that I would go like to go back to the hard times, but I know I could survive.

There’s been so much sadness in the last month or so that I am tempted to close my doors, pull my blinds and not turn on the television or computer and hibernate.

It is so hard to delete numbers from my cell phone, knowing I will never receive a call or dial Hayward Day’s voice again, along with a couple of others. If Hayward had lived he would have already brought pawpaws for me to share with Ann Calihan, as Johnny has lost his taste for pawpaws.

After cleaning and doing home health aide for someone over two years, now he is gone and each Monday is still difficult.

I will say one thing, your family can treat you terribly, never coming around for years, then like vultures after a dead carcass, they are at your house after you are gone. This person wanted to change his will, leaving everything to charity so his daughters who hadn’t seen him in several years couldn’t get anything.

He had been sick for a couple of weeks, but wouldn’t go to the doctor. When he was finally convinced, to go to the ER it was too late. He passed away one week later. The first thing he told his neighbor when he got to ER was, “I never did get my will changed.” Like I said, family members come like vultures.

Then I think of those who have gone through more than me, even though it hurts me of Hayward no longer here, I think of his family, how they have lost their dad, and several years ago their mother.

Of Johnny and Ann Calihan, what they have gone through and the love these two families have for their family and share with me.

I will say one thing, if everyone had families like Hayward Day, who were there for him, and my cousin Gracie Lewis Widner, who passed away recently, this world would be so much better. It is too late to stand by a casket and look down and think, I wish I had been there, or I wish I had done a little more.

Now on to a much lighter subject.

Saturday afternoon, I ventured to my daughter Anna’s, as Beechwood High School Marching Tigers are in competition. This was the last local event. Their next one will be in Toledo, Oh.

It rained Saturday morning, however it was a beautiful afternoon. The sky was such a beautiful shade of blue, and at times the air would get a chill as it was windy.

There was an intermission, so Anna and I drove back to get Scott and 10-year-old Kyle so they could attend the last part of the competition. Sarah and Taylor joined us.

As the sun started to go down of course the temperature started to get chilly. I had dressed for warmth, or at least I thought so, plus a soft warm throw. Before we left the house I tried to get Kyle to take a cover, which being a kid he refused. I told Anna I was getting an extra cover from my car and she said no, he will be alright.

Kyle decide he wanted a slushy from the concession stand. By now the temperature was cooler, and Kyle was glad to share my cover.

Beechwood Band is scheduled to perform in Winchester, and believe me when I say, I will take two covers, to make sure Kyle is warm.

Katie is doing an awesome job as drum major. Actually she is the first to be chosen, that has been a member of the color guard. It is really hard to realize that Katie is a senior, this will be the last year to attend Beechwood Marching Band activities.

Last year with the coronavirus the school was on virtual learning, so they missed out on everything.

Johnny and Ann Calihan are still hanging in there. Ann has improved a lot since she has been home, and is finally receiving therapy at home. Ann can get herself from the recliner into her wheelchair without assistance. This is one person that is going to show that she is not going to let a broken femur keep her down for long.

Happy birthday to Ann Calihan, who will be 91 years young Oct. 7.

Hello Buddy and Bernice Grubb, along with your grandson Mike.

Buddy, I hope you are improving a little more each day.

Mike and Marcia Caudill, I am not even thinking about saying I hope for at least one square dance, as I realize it is coming to the end of another year. I will try to see you again before winter arrives.

Les and Pat Wagner, I see on Facebook your garden did well this year.

Hello Tommy Tindell, I will try to visit you before too long.

Once again time is running out and I have to get this on its way.