Temperatures have dropped in Ohio Valley 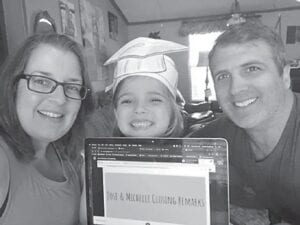 Five-year-old Sedona Ruskamp was graduated from kindergarten. Sedona is the daughter of Jeff and Brooke Ison Ruskamp, who resides in New York, and granddaughter of Michael Ison of Kingscreek.

Hello everyone! Happy Father’s Day to all you dads, grandpas or anyone that has taken an active part in some young child’s life. You don’t have to donate sperm to be a dad.

The same with being a woman; giving birth doesn’t always make you a mother.

I hope you haven’t put all your long johns away, as we are sure having a few chilly nights and mornings in this part of the Ohio Valley area.

Sort of reminds me of the time in June when Dad and Mom rented from Vernon Hogg. Mom had gone to do the barn to do her morning milking. Mom had closed up the heating stove, and stuck old rags around the stovepipes to keep the soot from falling. After all, it was June.

I was about eight years old at the time. The weather had turned chilly while Mommy was at the barn milking, and I decided to build a fire in the heating stove.

By the time Mommy was finished and was on the way back to the house, she noticed smoke coming out of the top of the house. The pipes were getting hot, and if she had waited much longer the rags she had stuck around the pipes next to the ceiling might have caught on fire. 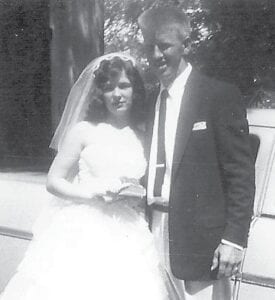 I was born half-grown instead of a child.

When I think back to my childhood, as Vernon Hogg’s house was between Roxana and “Hotspot” (Premium), I walked to Mill Branch Grade School, which was a long ways for a child my age to walk alone.

It is with God’s grace there weren’t perverts back in those days. The sad thing is I had to walk to school in the wintertime alone, never having the heavy coats or warm clothes as children have today.

I wore socks on my hands for gloves. I always had a head scarf or a white diaper to wear for a scarf.

The only thing that I ever was afraid of was a bully, who was quite a bit older than me would sometimes walk the railroad tracks and try to throw rocks up to the highway to try to hit me.

Even though I was little, I was smart enough to know it was much easier to throw rocks down towards the railroad tracks than up the hill, so I peppered them back at him.

I’ve said before, when I was born, my fists either came out swinging or my feet were ready to dance.

Those that believe you should never hit anyone, well let me tell you something that is no surprise to those that know me, don’t ever hit me or you will get walloped back.

I had to learn to take my part at too early of an age. I grew up too fast, which has helped me to be the stubborn, hardheaded, determined person that I am today.

I can look my children in the face and know I didn’t run to them when I surely could have used help during and after a bitter divorce that lasted almost two years.

There’s not a man that can say he gave me a dollar, either, to pay my bills.

I will always be grateful to my husband Jack for working as hard as he did to provide a good home for the children and me, but I worked just as hard raising our children, learning to take care of a garden, babysitting, and ironing for people to help supplement his income until he got a good job, and actually continued to do so afterwards.

There’s only one thing in my life that I regret, that’s not being strong enough to get an education. I am proud to say that my children and grandchildren have educations and professions they can manage on their own.

For the past few years I could live with a little more comfort, enjoying life to the fullest and going to Carcassonne Community Center and Campbell’s Branch Community Center.

Then June 1 slowed me down for at least one month.

I will always regret I didn’t take the chance and go to the Osborne Brothers Festival at Hyden, as it is cancelled this August.

I was still having trouble in October for Blackey Days and I was afraid to try that trip. I am now hearing the news that Blackey Days is cancelled for this year.

The trip to Washington, D.C., to Cherry Blossom Festival in April was postponed to June then cancelled. I didn’t get depressed, disappointed not depressed. Then Mother’s Day weekend at Old Coney was cancelled. It was very disappointing, as I’ve volunteered there for several years, even giving up going to the mountains for the Carcassonne square dance and Campbell’s Branch, as it always falls on the same weekend.

With everything shut down, I was able to keep an upbeat attitude, as I wanted so bad just to be able to drive through the mountains and see the ultimate beauty of spring being reborn.

When I received the news of the Osborne Festival being closed it began to hit me hard, yet I didn’t let it get me completely down as I was looking forward to Blackey Days in October.

Knowing this isn’t going to happen is affecting my frame of mind, as I need a diversion from everyday problems. I attended the event of Blackey Days and whether it was hot or cold, you would find me somewhere dancing.

One year I was so weak and I still drove home to the mountains to attend, then I was so weak Doris Adams held hands with me to keep me from falling. We still danced one complete dance.

What I can’t comprehend is if there are no musical events because of the coronavirus, how come there are thousands that are allowed to march, rioting and destroying everything in sight?

Music is essential to others maybe not as much to me, and playing music puts a little income for musicians.

I rather give up eating than to give up music. I had no choice except accept the fact I can’t dance, but there’s nothing wrong with my ears that I can’t listen.

Letcher County Judge Terry Adams sure must be busy as I am still waiting for a telephone call. His receptionist or whoever answered the telephone promised she would have him call about the road to the cemetery going up Tolson Creek to the top of Big Branch Mountain.

The cemetery was always known to my family as Coots Cemetery. Someone told my niece Sue Hall it was named Akemon Cemetery. I don’t recall seeing an Akemon buried there, which doesn’t mean there aren’t any, as there are so many graves that have a rock for a headstone.

In fact there are probably Akemons buried there as the cemetery is as old as the mountains. I do recall Mommy talking about someone named Aunt Frankie Akemon living on Big Branch.

I am going to make another effort to get hold of Judge Terry Adams this week, if to no avail I am making a trip to the mountains. If I have to put on a mask, gloves and a plastic raincoat, I would like to be able to visit my parents’ graves before it is wintertime.

From reading Speak Your Piece in The Mountain Eagle, I see that I am not the only one that is aggravated with County Judge Terry Adams with roads to a cemetery.

For the past 10 years I’ve driven a car that is so low I can’t get to the cemetery. I was lucky enough to have Sue and Mart Hall take me. Sue and I have gone by ourselves, when the road was passable yet unsafe.

I have thought about going to Pikeville to rent a vehicle so I can get over the rough spots, but that isn’t going to help when there are trees down, and the ditches are so deep the vehicle almost lays against the side of the mountain.

Hello to Pryor Day who resides in Temple, Tex., and enjoys The Mountain Eagle. Pryor ordered my book, ‘The Beauty of a Rose’ for his sister who lives in Columbus, Ind.

Shirley Hall from Indianapolis, it was so good to hear from you, as it has been a while. Thanks for ordering ‘The Beauty of A Rose.’ I sure hope you enjoy it.

Johnny and Ann Calihan are pleased their daughter Sue and her husband Tom Wagner closed on the house, yet hate to see Sue leave. One good thing is that Sue will only be about 20 minutes away from Harrison, and the same from their daughter Ashley and the twins.

My daughter Angie and Bennie Wiederhold have been living in bad condition during the 90-degree heat, as the air conditioning in her apartment has mold. It was 84 degrees in the apartment.

Angie has lived there 14 years. It is considered a condo, and she has tried to get the landlord to check the air conditioning several different times to no avail.

After trying to get the landlord to check the air conditioning the landlord said to Angie this is June, you have until August to be out.

In 14 years of living there Angie has never been late one single day in paying her rent.

Times have changed so much as now in order to rent an apartment, you are required to have three and four times amount of income, of what the rent is. Angie recently started getting SS Disability, which she can manage, except she sure doesn’t receive three times the amount of what an apartment costs.

This means that Bennie will probably have to change schools, which may be a good thing.

My son Keith Ballard is going to be the death of me yet. On my birthday the window fell on him, but thank God he wasn’t hurt.

Last Monday was a rough day for me at work. When I came home my sugar began to drop on me. I had started to drift off to sleep when I heard a noise outside. In my confused state of mind, I got to the front porch to see the ladder leaning against the air conditioner on the porch, with no sight of Keith.

I started to walk around the house thinking he might have been hurt, and was going to the back entrance to come in. All at once through the fog in my brain from the sugar dropping I heard, Keith saying, “Here I am.”

Now I am looking everywhere, as he said again, “Here I am,” then he said, “Look up here.”

Keith was on the porch roof pressure washing the upstairs when the wind blew the ladder down. After my knees quit shaking, with much difficulty I managed to get the ladder back in place.

While doing this, I said to Keith that in 1999 I had scraped the paint from the whole house, which is a two-story, all by myself. The years have taking a toll on me.

However I hope God permits me to be able to head for the mountains before long. I apologize for griping in this column I will try to do better next time.