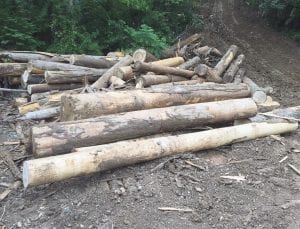 Letcher County Judge/Executive Jim Ward had this photograph on hand at this week’s meeting of the Letcher County Fiscal Court. Ward said the logs were cut by Kingscreek resident Bill Meade, who appeared at the court meeting to complain about weight limits on bridges.

Renewal projects in downtown Whitesburg and bridges out in the county were among the topics that took up most of the of the time during the June meeting of the Letcher County Fiscal Court.

Whitesburg physician John Pellegrini approached the court with a suggestion that the old Whitesburg Post Office, now the Letcher County Tourism Center, be declared surplus and sold at auction. Seth Long of HOMES Inc. asked that a house on Bentley Avenue in Whitesburg be sold or leased to HOMES for use as a studio space for selling donated building materials. The proceeds would go to help HOMES fund its work, Long said.

Pellegrini told the court that the tourism building is badly in need of repair in several areas and that he would like to buy it for use as an arts and cultural center. He said he would like to use the building for cultural events and to display art that he owns, as well as art from artists who want to get exposure and sell their work. He said the plumbing and electrical systems need upgrades, the roof will require work, and other renovation will be necessary as well.

Pellegrini said he doesn’t want to change the historical nature of the building, which was a WPA project built during the Great Depression, but that he may want to add a display wall for art exhibits.

“It should help bring people to town,” said Pellegrini, who added that he has already purchased several buildings and upgraded them before giving them to the city, including the current home of the Appalachian Law Center and others. Last week, he approached the Whitesburg City Council about the possibility of buying the old Salyer Radio building for use as a crafts center.

Pellegrini said that the tourism center doesn’t produce much in the way of jobs or revenue for the city or county in its current state and that sometimes the people who are allowed to use it for events doesn’t treat it with the respect it deserves. He added that he would want the entire site so he could control access to the building and prevent people from blocking the driveway and double parking in the lot.

District Five Magistrate Wayne Fleming said he had not been enthusiastic about the county’s buying the building in the first place and that he would like to see the property go back on the tax rolls.

“I think it needs to be used and enjoyed by everyone,” said Fleming. “If we could create some jobs too, that would be great.”

“Everything I own is occupied by a business,” said Pellegrini. “The most important thing I can do for Whitesburg is to help my town. It’s my town now too, just like it’s yours.”

Judge/ Executive Jim Ward spoke in favor of Pellegrini’s proposal as well, saying that creating jobs would make a big difference to the county and city.

Letcher County Tourism Commission Chairman David Narramore also supported Pellegrini’s proposal, saying that Pellegrini has an excellent personal art collection and that a number of fine local and regional artists have already displayed their work during ArtWalks and at the Summit City Lounge.

The court voted unanimously to declare the building surplus and to advertise it for bids.

The proposal by Seth Long didn’t go as well as Pellegrini’s.

Narramore, who is also on the board of directors of Letcher County Cares, the organization which operates the domestic violence shelter next door to the house in question, said the small wooden house was bought with the intent that it could be used as a rental property, with the proceeds going to help the domestic violence shelter with dayto day bills, or to use it for expanded space for the shelter. The house was once occupied by late Whitesburg service station operator Paschal Fields, who station next door is now the law office of James Asher.

District Three Magistrate Woody Holbrook suggested the matter be tabled until Letcher County Attorney Jamie Hatton can determine who actually owns the property. Holbrook said that while Hatton is doing his research, the two boards could meet to see if they can reach an agreement. Narramore suggested that the court look at the original legislation that allocated coal severance tax funding to buy the property to determine intent.

Narramore reported to the court that tourism contributed $13 million to the local economy last year, according to the Kentucky Department of Tourism/ Arts and Heritage. This is up from $12.5 million last year.

Meade, who is a member of the Kingscreek Volunteer Fire Department, complained about weight designations on county bridges and said that the state needs to re-evaluate them so that loaded fire trucks can traverse them and be insured while doing so. He also complained about a Dumpster being removed by the county from the Kingscreek area.

Ward told Meade the Dumpster was not being paid for and was needed elsewhere, and referred to a slide on computer screen showing damaged roads and another showing cut logs and told Meade that he knew that the matter he was concerned with was hauling equipment and logs on the bridges rather than fire trucks. He added that the road Meade had referred to was not only out of the Kingscreek VFD’s service area, it had been nearly destroyed by overweight hauling and would have to be resurfaced.

Ward asked Meade if he had been logging in that area and Meade replied that he had only been creating a “house seat.”

Ward and Meade had a heated exchange about the road and Meade’s intentions and several times Meade told Ward that he “could care less” about Ward’s concerns. Ward repeated that the road had been destroyed by overweight trucks hauling there and added that the county does not have the funds to build new bridges at this time. He pointed to the screen, showing the broken blacktop and said, “This is what they have done to our blacktop.”

“We could care less,” replied Meade.

Ward gaveled Meade down and told him his time in front of the court had run its course.

In other business, the court voted to adopt a plan for county employees’ insurance. Judge Ward asked Letcher County Parks and Recreation Director Derek Barto, who was a member of a committee designated to examine insurance price increases, to address the court with the committee’s findings. Barto said that a price increase had been inevitable and that the county had experienced a larger than usual number of claims in the last fiscal year.

Barto said that it had cost $429.41 in the last fiscal year per employee and that the increases this year brought the price to $499.04, which added over $100,000 to the cost. He said this was unsustainable for the county at this time and that the best option that was presented to the committee involved raising the deductible per employee from $3,000 to $5,000. This would cost $430.47 per employee, and would only raise the annual cost to the county by $1,653.60.

Ward said there are still mechanisms in place that will help court employees with the cost of the deductible and added that there is a health savings plan option to allow employees save each month to go toward the deductible that will grow as long as it is not used and can help with out-of-pocket expenses. He added that the plan, which comes through the Kentucky Association of Counties (KACO), is a very good one and that other expenses like dental and vision had only grown by around one percent.

“It’s still a Cadillac of a plan,” said Ward.

• Judge Ward told the court it had realized just over $30,000 on the sale of surplus equipment and that several new pieces of equipment are on order.

• In response to a question form Magistrate Fleming about funds for the domestic violence shelter, Ward said it is his understanding that the money is now in Frankfort and will be released as soon as the paperwork is completed. He said that due to the way the state operates, until the money is actually in place for coal severance projects, the paperwork cannot be started.

• Fourth District Magistrate Keith Adams said that State Highway Department workers from the Whitesburg office have been working to make repairs on Highway 160 and that although they had been pulled way for work on US119 on Pine Mountain, they will return to finish the job.

• The court conducted the second reading of an ordinance that sets the speed limit on Stallard Drive at 10 miles per hour.

Bank balances for county agencies as of June 9: