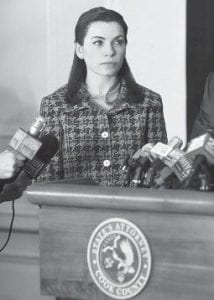 Julianna Margulies stars as Alicia Florrick in a scene from “The Good Wife,” premiering Sept. 22 at 10:00 p.m. on CBS. (AP Photo/CBS)

In sizing up the new series on tap for fall, it’s worth remembering that a new show usually premieres with its pilot episode. And a pilot isn’t always representative of the series that will follow.

The pilot episode is a prototype, sample and sales tool whose primary mission is to win a place in the grid for its prospective series.

Then, when it airs, the pilot has another hurdle to clear. It must introduce the series to viewers in a way that induces them to watch the second episode.

Then and only then can the show find its rhythm and start being a series.

So judge the success of a pilot this way: Once you’ve seen it, does it make you want to come back and see more?

Among the broadcast networks’ 21 fall series, here are 10 whose debut episodes just might whet your appetite for a second round:

√ “Glee” (Fox, Sept. 9). Maybe you already saw the pilot (which Fox first aired last spring and currently is putting online). A musical comedy about a struggling high school glee club, it was pitchperfect. The series picks up Sept. 9 with the second episode. It, too, is quirky, tuneful, up-tempo fun.

√ “Community” (NBC, Sept. 17). No disrespect meant to community colleges, but this one (Greendale Community College) is an ideal backwater for goof balls, schemers and slackers. Sharp writing and a classy ensemble (including Joel McHale, John Oliver and Chevy Chase) earn the very funny pilot an A-plus.

√ “The Good Wife” (CBS, Sept. 22). Julianna Margulies has never been better as a wife and mother forced to pick up her long-dormant career as an attorney and return to work in a pressurecooker law firm after her politician hubby, played by Chris Noth, lands himself in jail. There are a lot of human issues to sort out here — apart from the legal cases — and a splendid cast to do it.

√ “Mercy” (NBC, Sept. 23). A skilled, outspoken nurse, Veronica Callahan is back at New Jersey’s Mercy Hospital after a tour in Iraq, with more personal problems than when she left. “I don’t need to talk to anybody about it,” she tells her boss sarcastically. “You know why? Because, I’m on delicious Paxil.” The Paxil’s not working. But viewers, keep your fingers crossed that “Mercy” keeps on working as well as its pilot, where Taylor Schilling is terrific as its star.

√ “Modern Family” (ABC, Sept. 23). A lively half-hour boasting interlocked tales of three disparate families and a full-to-bursting ensemble (including Ed O’Neill, Julie Bowen and Sofia Vergara). Can this ambitious comedy make the most of its rich resources, and stay as brisk and funny as the pilot? Here’s hoping.

√ “Cougar Town” (ABC, Sept. 23). Courteney Cox as a woman with cellulite?! This comedy about a 40-year-old divorced mom is both riotous and strangely true-tolife as it depicts youth obsession, and how the no-longer-quiteyoung grapple with it. Dicey material. But auspiciously enough, Bill Lawrence is a “Cougar Town” executive producer and writer. As mastermind of “Scrubs” he proved long ago he can find the familiar and funny in zaniness.

√ “FlashForward” (ABC, Sept. 24). It happens to everyone on Earth, including all the characters who populate this eerie thriller: They black out for two minutes, during which they see visions of their future as they might (or might not) live it on a certain day next April. What’s causing this? Will the visions come true? And, hey, isn’t that “Family Guy” creator Seth MacFarlane in a cameo appearance? If you watch this episode, expect your future to include more episodes.

√ “Brothers” (Fox, Sept. 25). The premise sounds like a sitcom at its most cliche: Two brothers (played by Michael Strahan and Daryl “Chill” Mitchell) who, in adulthood, squabble as they did when they were boys, plus their parents (Carl Weathers and CCH Pounder), all living under the same roof. The appeal of the pilot is its execution. It’s fresh, relatable, engaging. And funny.

√ “Trauma” (NBC, Sept. 28). Lots of action. Lots of blood. Lots of rescue. Lots of hanky-panky. The first-responder paramedics from San Francisco City Hospital are a trauma team who, in various ways, are themselves traumatized, both on and off the job. The pilot’s pyrotechnics and Bay Area locations make it look great. But what makes the series worth a second look: the fiercely complicated characters played by Anastasia Griffith and Cliff Curtis, who soar above the show’s formulaic melodrama.