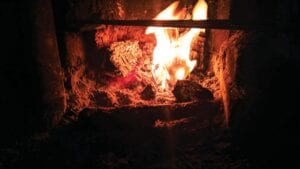 We heated our old house on Blair Branch with a combination of wood and coal. The kitchen cookstove was started with a fire made with short, slender sticks of “stove wood,” as was the big “Warm Morning” heating stove in Dad’s and Mom’s big bedroom. After the wood fires were going strong, both were usually stoked with coal.

The big bedroom/living room where my brothers and I slept was heated with an open grate fireplace that could be fired with both coal and/or large chunks of firewood. We often burned wood up until bedtime and then “banked” the fire with a bucket of coal. Whichever of us froze out the fastest had to get out of bed, use a poker to stir the embers back to flame and add more coal. That happened two or times nightly, depending on the outdoor temperature, which could rapidly turn into the same as the indoor temperature if the fire got low. Between November and April the fireplace rarely went out, no matter what time of day it happened to be.

When we were out of school between Christmas and the first week of January, my brothers and I spent several hours every day sawing and splitting firewood to get us through the rest of the winter. It seemed that someone was always cutting a load or two of sawlogs every year at Pap’s (my grandpa’s 80 acre, hillside “farm”) and we would drag the tree laps out of the woods with old Dock, our big, 1,600 pound Percheron draft horse who actually believed himself to be a gentle hound, if not a person with four legs.

Until I was in high school, we rarely had a working chain saw and the wood was sawed up with a long cross-cut saw that required two people, one on each end, to pull the blade from side to side. My brothers and I probably learned more about teamwork with that old saw than we did in any other aspect of our young lives.

The wood was almost always knotty, up to 20 or more inches in diameter and usually impossible to fit in a fireplace. It had to be split into three or four smaller chunks, another impossibility for a broad ax. We used steel wedges and a sledgehammer to do the splitting. In the process we learned a lot about trust. Try holding a five-pound splitting wedge upright, on a very short fire log, while your brother pounds it into a piece of seasoned hickory with an eight-pound sledgehammer and tell me how safe you feel about your job, if you want to know what I’m talking about. Try doing it when the ground is frozen hard and the temperature is well below freezing.

Somehow, we survived all those years without any broken bones, at least not any that involved cutting wood. I do recall a few times when an errant wedge went flying and I thought I had some broken ribs. In fact, many years later, a doctor was looking at an x-ray he had taken for an entirely different reason and he asked me how I’d broken two long ago healed ribs. I told him it could have been any one of a few dozen mishaps and impossible to say which one. A splitting wedge would rank high on the list of possibilities. He had no idea what I was talking about.

On rare occasions, Dad would allow us to saw up tall, straight, poplar trees for firewood. He had originally sawed them down to make mining timbers. When they were cut into firewood they could easily be split in half with one swing of an axe. To this day I still call any wood that splits so easily, “gravy wood” because it is easy as gravy.

Unfortunately, when I was growing up, the only gravy we encountered was usually served at the breakfast table and, if I made it, it was usually scorched.