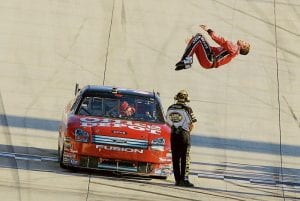 The tension in this Chase for the championship was evident after the first pit stop at Dover, where title contender Tony Stewart angrily bumped Paul Menard because the rookie crowded him.

By the time Round 2 was over, an incensed Denny Hamlin wanted to fight Kyle Petty after an on-track accident led to an offtrack confrontation.

Emotions nearly erupted at Dover International Speedway, where the top half of the Chase field left Sunday’s race separated by a mere 18 points. The bottom half packed up their crumpled cars for Kansas Speedway, clinging to fading championship hopes.

There’s little room for error in this year’s Chase, where a stout 12-driver field has ratcheted up the competition. A bad day better not be a finish in the 30s or below. With this talent level, anything outside the top 10 can seriously stall a drive toward the Nextel Cup title.

It’s why Stewart was incensed following the first pit stop. Menard had the stall in front of him, and he didn’t give Stewart much room on the crowded service road. Stewart had to back up to exit his spot, and just as he tried to pull out, Menard slid in front of him.

The two-time champion made it clear he expected pit-road respect by bumping Menard several times as they traveled down pit road, then pulling alongside him and slamming into his right front fender. It was foolish on Stewart’s part – all that banging could have damaged his car – but he knew he couldn’t afford slow stops all day and needed Menard to be accommodating.

Despite the early incident with Menard and an ill-handling race car that dropped him a lap down early, Stewart salvaged a ninth-place finish that moved him to second in the Chase standings, just two points behind leader Jeff Gordon.

“If there was one place I was worried about, it was here,” Stewart said of Dover. “To salvage a top 10 out of it with the way we started the day. … There were a lot of good cars that are in the Chase that had a bad day, and not having a bad day is what you’ve got to do.”

Hamlin, his teammate, wasn’t so lucky.

His car was fantastic early, and he led 61 laps to establish himself as a favorite. He had faded back to sixth at the halfway point of the race and was cutting through lapped traffic when he incorrectly judged the best way to get around Petty.

The miscalculation sent him smack into the back of Petty, and the 29-year veteran was none too pleased after both cars wrecked. Petty went to Hamlin’s garage stall to find the secondyear driver, who was strapped inside his car with his helmet still on when Petty arrived.

Petty pulled down the window net to yell at Hamlin, then slapped the visor on his helmet down before stalking off. Hamlin then pulled off his equipment and scrambled out the window, but was restrained from chasing after Petty by a NASCAR official and several team members.

He was livid – not so much about the accident but at the lack of respect from Petty – and indicated the incident was not over.

“Don’t smack me in the helmet. You smack me in the helmet I’m going to punch you in the face,” Hamlin said. “You don’t come to my car. You don’t come to my pit. You meet me someplace else, and we’ll settle it. I have the utmost respect for Kyle, but don’t lay your hands on my head. I did not say one thing to him. He chose to slap my helmet. I have a short fuse. Don’t do that.”

The frustration is clearly mounting for Hamlin, who started the Chase as a favorite to contend for the title.

But his Joe Gibbs Racing team was off at New Hampshire, and he finished a disappointing 15th in the opening Chase race. He was 38th in Dover because of the accident with Petty, and now finds himself last in the Chase standings – a whopping 158 points behind the leader.

It’s not impossible to overcome that deficit, but it’s going to be mighty hard for Hamlin and the rest of the drivers stuck at the back end of the standings.

Kurt Busch is 151 points out after a part failure in New Hampshire and a late accident in Dover. A blown motor – his first in almost two years – dropped Matt Kenseth to 10th in the standings and 116 points out, while Kevin Harvick has yet to put together a good run in the Chase and sits in ninth, 115 points out.

“If it wasn’t for bad luck, I don’t think we would have any luck at all this year,” Harvick said.

With the competition so tight at the top – sixth-place Clint Bowyer is only 18 points out of first – the realization has set in that the driver who is as close to perfect as possible will win this Chase. That has put the contenders clearly on edge, especially those who know if they don’t rally this weekend in Kansas, the Nextel Cup will not be coming home with them this year.