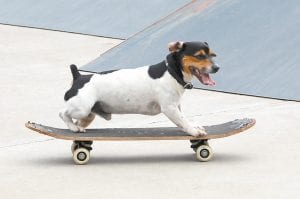 SKATE DOG — Jack, a three-year-old Jack Russell terrier, was a fan favorite at the Letcher County Skate Off and BMX Competition at the Letcher County Skate Park in Whitesburg on July 31. Jack learned how to skateboard after watching two brothers, Michael and Christopher Ingram, skateboard at their Linefork home and at several diff erent skate parks. Michael Ingram, 16, won first place in the senior division of the skateboard competition. Two video clips of Jack skateboarding on July 31 can be viewed for free on a video gallery at www.themountaineagle.com.

Jack is three years old and skateboards. What’s even more impressive is that he is a Jack Russell terrier.

Lou Anne Ingram, of Linefork, said since Jack was a puppy she would take him with her and her two sons, 16-year-old Michael and 12-year-old Christopher, to skateboard parks. Ingram said Jack has always liked skateboards and one day he climbed on top of one.

“Every time they would practice skating in front of the house, he would get on a board,” said Lou Ann Ingram. “Michael and Chris would coach him a little.”

Then one day while at the Letcher County Skate Park in Whitesburg, Jack decided to show the other skateboarders his moves. Jack has skated at skateboard parks in Whitesburg, Middlesboro, Hazard and Kingsport, Tenn.

“He’ll skate right with them and he’ll keep up, too,” said Ingram.

Jack, who pushes at the concrete with his hind leg, barks the whole time he skates and often chews on his board. Yes, Jack has a board that Ingram bought just for him. 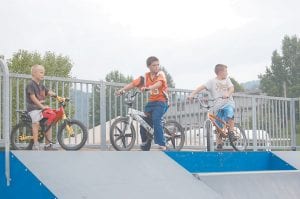 The Ingrams hadn’t thought about teaching Jack how to skate, he just insisted on learning how to ride on a skateboard.

“We didn’t even think about it,” said Ingram.

Ingram said it didn’t take any coaxing to get Jack onto a skateboard because he wanted to skate like Michael and Chris.

“He picked it up really easy,” said Ingram. “I don’t know why. I guess where the boys do it and there’s always a skateboard around.”

In addition to skateboarding, Jack enjoys riding on a boat and on an all-terrain vehicle with the Ingrams.

Jack can even play basketball by hitting the ball with his nose.

“He just does it all,” said Ingram. “He’s a little sports dog. We get out in the yard and he wants to play, too.” 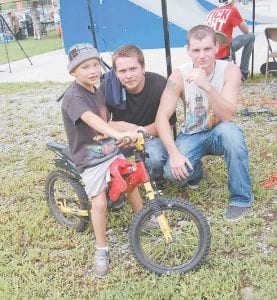