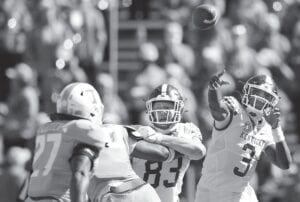 Terry Wilson (3) is only the second UK quarterback to have won at Florida and Tennessee thanks to UK’s 34-7 win last week. (SEC Photo)

He made history but Kentucky quarterback Terry Wilson remained as humble as ever after UK’s 34-7 win at Tennessee Saturday.

The win enabled Wilson to join Derrick Ramsey as the only UK quarterbacks to win at both Florida and Tennessee. Ramsey played at UK from 1975-77.

“It is special,” Wilson said about joining Ramsey’s legacy. “I know it means a lot to this state and to the University of Kentucky. I am fortunate and glad to be in this position and have a chance to go battle.”

I thought former UK great Babe Parilli might also have wins at both places. He played at UK from 1949-51 before going on to star in the NFL. He went 3-0 against Florida but was 0-3 against Tennessee, including a 7-0 loss in Knoxville.

Wilson admitted it was “huge” to win at Florida (2018) and now Tennessee. He said he was in “great company” with Ramsey.

“It is pretty fun to just see some things that have not been done in recent years,” Wilson said. “I wanted to go on the road and beat teams we haven’t in a while. It’s an awesome feeling to get this win.”

He’ll have more historic chances coming up. Kentucky hosts Georgia Oct. 31 and then plays at Florida and Alabama in November. Winning any of those games would add to his historic resume.

Wilson is now 14-5 as a starting quarterback going into this week’s game at Missouri. Yet before the win at Tennessee some were speculating Wilson might be on the verge of losing his job to backup Joey Gatewood, something Stoops insisted was never true.

“I just worry about what I can do to help our team win games. That is what I am focused on. Outside noise will always be there but I control what I control and just try to get better each week.” s

No matter how this season turns out for coach Mark Stoops and his team, what happened the day after UK beat Mississippi State might be the most significant event of the season.

Oats was expected to be one of UK’s defensive leaders this season. Instead, Oats had an undisclosed medical issue during the summer that sent him to the hospital and then rehab before he was finally able to return home recently.

“We don’t take enough time to be grateful for what we have, and our team needs to understand that and things can change in a moment,” Stoops said. “We have enough situations on our team where we can look right at those examples and realize how fortunate we are and we need to make the most of every opportunity that we have.”

Defensive lineman Josh Paschal was diagnosed with skin cancer two years ago but is now back playing. Offensive line coach John Schlarman was also diagnosed with cancer then and despite taking chemotherapy and other treatments he’s yet to miss a game.

“Josh has been through some tough situations and to see him come out on the other side is also inspirational. Think about what coach Schlarman is going through and I can tell you without getting into details, that it is amazing and inspirational what John is doing. It is tough on him,” Stoops, who gave the game ball to Schlarman after UK’s win at Tennessee last week, said. “To see Chris like that, it was good to see him. He is strong and doing good but it is a tough, long road to recovery that he has.”

However, Stoops remains optimistic that Oats, a junior, will be able to play again.

“That is being very optimistic, but that is what I believe. He has a long, long way to go, and he needs our prayers,” Stoops said.

A different Kentucky player is wearing No. 22 each game this season in honor of Oats.

The more Miami won in the NBA playoffs, the more fans and friends reached out to Travis Riesop to tell him how surprised they were at how well Tyler Herro was playing.

“Me, I was thinking, ‘He’s always been that way. Why did you just figure that out?” said Riesop, Herro’s coach at Whitnall High School in Greenfield, Wis.

Herro scored over 2,000 points and averaged 32.9 points per game his senior season before heading to Kentucky where he averaged 14 points, 4.5 rebounds and 2.5 assists per game in his only season. He was the 13th pick in the 2019 NBA Draft and emerged as a national star during the NBA bubble.

“I got asked a lot if I was surprised at what he did,” Riesop said. “I have always felt like as Tyler gets more acclimated and gets more comfortable and has a defined role he just gets better. The stuff I read about the chemistry the Heat had was something he thrives off of. He did in high school and he did at Kentucky.

“He could not have gone to a better organization for him. They just had a lot of gritty guys with chips on their shoulders wanting to prove they were damn good basketball players. For him it was just the perfect scenario and he played huge minutes and became a problem to guard for a lot of guys.”

Herro scored in double figures in 20 straight playoffs games. He became the youngest player ever to start a NBA Finals game. He set a record for 3-pointers by a rookie in the playoffs and became just the sixth rookie to score over 300 playoff points. He became the first player 20 or younger to score 37 points in a conference final. In the 21 playoff games he averaged 16.5 points, 4.0 rebounds and 3.0 assists per game.

“He has that sneaky athleticism. He is like a predator in the weeds just sitting and waiting for his opportunity. If he sees success, then his confidence really goes through the roof,” Riesop said. “If you watch and he makes one or two shots, he gets on a roll and you can just see that energy. You could see it at Kentucky.”

Riesop said Herro’s rise has been like a fairy tale. Two years ago he was playing in high school, played a year at UK, got drafted and then was in the NBA bubble where he helped the Heat reach the championship series.

“It was a pretty surreal experience,” Riesop said. “People talk to me about having a Division I player on my team. My dad coached and knows a lot of guys that had maybe one D-1 player in their whole careers. I had one in my first year of coaching and now he’s a NBA player. How awesome is that? But Tyler is also a great role model for kids in our community.”

Herro was not exactly a folk hero when he reneged on his verbal commitment to Wisconsin and then left the state to play at Kentucky. He was booed during his senior season regularly by opposing fans.

“The community of Whitnall always had his back. Our school and community were really excited for him,” Riesop said. “It (fan hatred) is just water under the bridge. It’s hard to say you dislike him. Not a lot of guys from our home state do what he has. He’s never been in trouble. He just played basketball and is damn good at it.

“I think true basketball fans are now admiring how good a player he is with the way he performed during his rookie year and then elevated his play at the end.”

Riesop said there’s one other reason even Wisconsin fans are now gravitating more to Herro’s success.

“He’s really a likable guy and Kentucky fans already knew that,” Herro’s high school coach said. “You don’t look at him and say he’s way too cocky. He has a little smirk but he credits teammates all the time for his success. I feel like he just tries to soak in all the experience and he just enjoys what he’s doing. At Kentucky they had a lot of stars and he played his role but at the end in the big games he did more. Now he’s started to showcase even more of what he can do in the NBA.” s

What kind of role will 6-10, 205-pound freshman Isaiah Jackson have on John Calipari’s team this season.

“Taller people take longer to find themselves and find a voice on the court,” Kentucky assistant coach Joel Justus said. “He is working on his body to get healthy and stronger. When young guys feel they are getting better and more comfortable, they can get better.”

Justus is hoping Kentucky will have Olivier Sarr, Jackson and freshman Lance Ware all to play the power forward/center positions.

“We have got a long wiry, group of dudes on this team. They all need to be stronger versus bigger,” Justus said. “We are never going to look like Michigan State in November and December. Cal wants our guys strong and (strength coach) Rob Harris does a great job getting that done.”

Can Jackson be a rim protector Calipari values having so much?

“With his length and leaping ability, anytime he can protect the rim and get blocks he can really start our offense,” Justus said. “Get deflections or force shots and get long rebounds will be our best offense in transition. He runs the court so well, too. Rim protection, rebounding and running the court are the things he does best right now and he’s working to get everything else better, too.”

“He is nice. He is going to be one to watch this season. Write it down,” Allen said. s

Former UK golfer Chip Mc- Daniel thinks it is “incredible” that over 100 high school and college golfers will be playing in the Cullan Brown Invitational later this month.

Brown was a state high school champion at Lyon County who played one year at UK before being diagnosed with cancer. He died in August at age 20.

“What happened to Cullan was so unfortunate and I will always support him and his family. They were absolutely incredible and still are,” McDaniel said. “I know they started this foundation to help junior golfers primarily in western Kentucky and that’s cool to see.

“Cullan was very unique and such a special person. I am not sure if I will ever meet anybody quite like him again. Anyone who asks me, that’s what I tell them. He was one of a kind.”

McDaniel was not surprised to see so much support for his former UK teammate not just in this event but in many other ways since his death.

“It’s just a testament to how many different age groups he really touched,” McDaniel, who is from Clay County, said. “From a 10-year-old to his peers, everybody loved him and looked up to him. People much older than Cullan still loved him. He just had a way of connecting with every single person he met.” s

Quote of the Week: “What a great win for BBN and Mark Stoops. Fantastic performance to break the streak. Getting backups snaps for players at Tennessee just feels good,” former UK coach Rich Brooks after UK’s 34-7 win at Tennessee.

Quote of the Week 2: “I think a lot of these guys are more talented than they have been showing. Two years ago UK sent a lot (of players) to the league and now some of them think they can do that just by showing up and it doesn’t work that way. I think some of the skilled players came into the season thinking they were NFL ready and were going to intimidate somebody but it doesn’t work that way in the SEC,’” former UK all- SEC running back Anthony White on UK’s defense.