“Even people who have stopped smoking, there’s a significant risk of cancer down the road...” —Dr. Neal Ready, Duke Univ. specialist 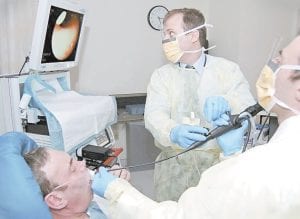 David Lowney, left, underwent a bronchoscopy by Boston University School of Medicine researchers Dr. Avrum Spira, center, and Dr. Frank Schrembi, right, in Boston on April 6. The procedure is part of a test to measure a genetic change inside patients’ windpipes to try to tell which smokers have the highest risk of developing lung cancer. (AP Photo/Boston University School of Medicine)

Scientists may have found a way to tell which smokers are at highest risk of developing lung cancer: measuring a telltale genetic change inside their windpipes.

A test based on the research now is being developed, in hopes of detecting the deadly cancer earlier, when it is more treatable.

If the work pans out, the next big question is: Might it even be possible to reverse this genetic chain reaction before it ends in full-blown cancer? The researchers found a tantalizing early hint among a handful of people given an experimental drug.

“They’re heading toward lung cancer, and we can identify them with this genomic test,” said Dr. Avrum Spira of Boston University School of Medicine, who led the research published April 7 in the journal Science Translational Medicine.

Lung cancer — which killed nearly 160,000 Americans last year — is the leading cancer killer, and cigarette smoke is by far its main cause. Yet, not all smokers develop lung cancer; Spira cites estimates that 10 to 20 percent will. The risk depends in part on how much people smoke, for how long and how long ago they quit, but there is no way to predict who will escape it and who will not. Nor is there a good way to detect early-stage tumors. Consequently, most people are diagnosed too late for today’s treatments to do much good.

“Even for people who have stopped smoking, there’s a significant risk of cancer down the road, and it would be nice to identify which patients are really at risk,” said Duke University lung cancer specialist Dr. Neal Ready, who was not involved with the new research but called it intriguing.

“To have some sort of molecular test that would identify those patients would be very useful,” he added, because they could receive close monitoring with lung scans that are not practical for everybody.

Rather than focusing on the lung itself, Spira’s team took a different approach. Smoking bathes the entire respiratory tract in toxins. So he hunted for the earliest signs of impending lung cancer upstream, in how different genes are turned on and off inside the upper airway as the body tries to defend itself and those defenses weaken over time.

Every year at least 100,000 smokers or former smokers have tubes snaked down their throats to look for signs of cancer if an X-ray or other test detects something suspicious, Spira explained. A bronchoscopy can be used for a look into the lung, but Spira was interested instead in cells that line the windpipe, collected during the same procedure.

Sure enough, he found a genomic signature — a pattern of gene activity — in otherwise normal windpipes that distinguished some current or former smokers who had lung cancer from those who did not.

Then with Dr. Andrea Bild of the University of Utah, Spira analyzed cells from 129 current and former smokers and found the genes involved were part of a wellknown cancer causing pathway named the PI3K pathway. When PI3K-related genes are too active, too much cell growth can occur, but most studies have examined those genes only in tumors.

Wednesday, Spira reported finding PI3K activation in some current or former smokers with precancerous lesions, too, but not in those with other lung diseases.

Spira cannot estimate how much lung cancer might be due to this genetic pathway. Nor does the work mean it is OK for people without this marker to keep puffing. Other lung cancer pathways could be at work, and smoking also causes heart attacks, other lung diseases and other cancers.

But a company Spira helped found, Allegro Diagnostics Inc., is beginning a study of up to 800 current and former smokers who need bronchoscopies anyway to see how well a test based on the research performs.

Moreover, there are some experimental drugs being designed to fight PI3K activation. One compound already had been tested in nine smokers with precancerous lesions, six of whom had their lesions improve. Spira’s team went back and checked those study participants’ previously stored airways cells and found those who had responded to the compound indeed had their PI3K activity drop, a preliminary but exciting clue in the quest to develop cancer-preventing drugs.

“There’s enough evidence in this article to start down that road” of researching PI3K chemoprevention, said Duke University’s Ready.