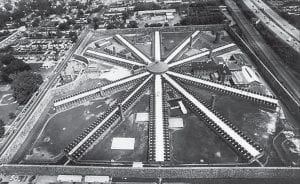 This is an undated photo of Holmesburg Prison in Philadelphia which was constructed in 1896. The prison is typical of large, fortress-like penal institutions built in the 19th-century that incorporated spoke and wheel architecture. This prison made extensive use of inmates for medical experiments. Shocking as it may seem, government doctors once thought it was fine to experiment on disabled people and prison inmates. (AP Photo/The Urban Archives — Temple University)

Much of this horrific history is 40 to 80 years old, but it was the backdrop for a meeting in Washington this week by a presidential bioethics commission. The meeting was triggered by the government’s apology last fall for federal doctors infecting prisoners and mental patients in Guatemala with syphilis 65 years ago .

U. S. officials also acknowledged there had been dozens of similar experiments in the United States — studies that often involved making healthy people sick.

An exhaustive review by The Associated Press of medical journal reports and decades-old press clippings found more than 40 such studies. At best, these were a search for lifesaving treatments; at worst, some amounted to curiosity-satisfying experiments that hurt people but provided no useful results.

Inevitably, they will be compared to the wellknown Tuskegee syphilis study. In that episode, U.S. health officials tracked 600 black men in Alabama who already had syphilis but didn’t give them adequate treatment even after penicillin became available.

These studies were worse in at least one respect — they violated the concept of “first do no harm,” a fundamental medical principle that stretches back centuries.

“When you give somebody a disease — even by the standards of their time — you really cross the key ethical norm of the profession,” said Arthur Caplan, director of the University of Pennsylvania’s Center for Bioethics.

Some of these studies, mostly from the 1940s to the ‘60s, apparently were never covered by news media. Others were reported at the time, but the focus was on the promise of enduring new cures, while glossing over how test subjects were treated.

Attitudes about medical research were different then. Infectious diseases killed many more people years ago, and doctors worked urgently to invent and test cures. Many prominent researchers felt it was legitimate to experiment on people who did not have full rights in society — people like prisoners, mental patients, poor blacks. It was an attitude in some ways similar to that of Nazi doctors experimenting on Jews.

“There was definitely a sense — that we don’t have today — that sacrifice for the nation was important,” said Laura Stark, a Wesleyan University assistant professor of science in society, who is writing a book about past federal medical experiments.

The AP review of past research found:

— A federally funded study begun in 1942 injected experimental flu vaccine in male patients at a state insane asylum in Ypsilanti, Mich., then exposed them to flu several months later. It was co-authored by Dr. Jonas Salk, who a decade later would become famous as inventor of the polio vaccine.

Some of the men weren’t able to describe their symptoms, raising serious questions about how well they understood what was being done to them. One newspaper account mentioned the test subjects were “senile and debilitated.” Then it quickly moved on to the promising results.

— In federally funded studies in the 1940s, noted researcher Dr. W. Paul Havens Jr. exposed men to hepatitis in a series of experiments, including one using patients from mental institutions in Middletown and Norwich, Conn. Havens, a World Health Organization expert on viral diseases, was one of the first scientists to differentiate types of hepatitis and their causes.

A search of various news archives found no mention of the mental patients study, which made eight healthy men ill but broke no new ground in understanding the disease.

— Researchers in the mid-1940s studied the transmission of a deadly stomach bug by having young men swallow unfiltered stool suspension. The study was conducted at the New York State Vocational Institution, a reformatory prison in West Coxsackie. The point was to see how well the disease spread that way as compared to spraying the germs and having test subjects breathe it. Swallowing it was a more effective way to spread the disease, the researchers concluded. The study doesn’t explain if the men were rewarded for this awful task.

— A University of Minnesota study in the late 1940s injected 11 public service employee volunteers with malaria, then starved them for five days. Some were also subjected to hard labor, and those men lost an average of 14 pounds. They were treated for malarial fevers with quinine sulfate. One of the authors was Ancel Keys, a noted dietary scientist who developed Krations for the military and the Mediterranean diet for the public. But a search of various news archives found no mention of the study.

— For a study in 1957, when the Asian flu pandemic was spreading, federal researchers sprayed the virus in the noses of 23 inmates at Patuxent prison in Jessup, Md., to compare their reactions to those of 32 virus-exposed inmates who had been given a new vaccine.

One was likened to Tuskegee. U.S.-funded doctors failed to give the AIDS drug AZT to all the HIVinfected pregnant women in a study in Uganda even though it would have protected their newborns. U.S. health officials argued the study would answer questions about AZT’s use in the developing world.

The other study, by Pfizer Inc., gave an antibiotic named Trovan to children with meningitis in Nigeria, although there were doubts about its effectiveness for that disease. Critics blamed the experiment for the deaths of 11 children and the disabling of scores of others. Pfizer settled a lawsuit with Nigerian officials for $75 million but admitted no wrongdoing.

Last year, the U.S. Department of Health and Human Services’ inspector general reported that between 40 and 65 percent of clinical studies of federally regulated medical products were done in other countries in 2008, and that proportion probably has grown. The report also noted that U.S. regulators inspected fewer than 1 percent of foreign clinical trial sites.

Monitoring research is complicated, and rules that are too rigid could slow new drug development. But it’s often hard to get information on international trials, sometimes because of missing records and a paucity of audits, said Dr. Kevin Schulman, a Duke University professor of medicine who has written on the ethics of international studies.

These issues were still being debated when, last October, the Guatemala study came to light.

In the 1946- 48 study, American scientists infected prisoners and patients in a mental hospital in Guatemala with syphilis, apparently to test whether penicillin could prevent some sexually transmitted disease. The study came up with no useful information and was hidden for decades.

The Guatemala study nauseated ethicists on multiple levels. Beyond infecting patients with a terrible illness, it was clear that people in the study did not understand what was being done to them or were not able to give their consent. Indeed, though it happened at a time when scientists were quick to publish research that showed frank disinterest in the rights of study participants, this study was buried in file drawers.

“It was unusually unethical, even at the time,” said Stark, the Wesleyan researcher.

“When the president was briefed on the details of the Guatemalan episode, one of his first questions was whether this sort of thing could still happen today,” said Rick Weiss, a spokesman for the White House Office of Science and Technology Policy.

That it occurred overseas was an opening for the Obama administration to have the bioethics panel seek a new evaluation of international medical studies.

The panel is to send a report to Obama by September. Any further steps would be up to the administration.

Some experts say that given such a tight deadline, it would be a surprise if the commission produced substantive new information about past studies. “They face a really tough challenge,” Caplan said.