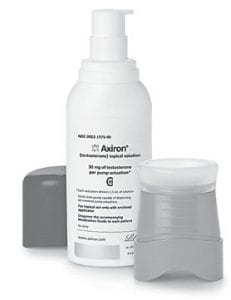 Axiron, an underarm gel that rolls on like deodorant, is one drug used by men struggling with symptoms of growing older associated with low testosterone. (AP Photo/Eli Lilly & Co.)

“Are you falling asleep after dinner?”

“Do you have a decrease in libido?”

“Have you noticed a recent deterioration in your ability to play sports?”

Welcome to the latest big marketing push by U.S. drug companies. In this case, it’s a web page for Abbott Laboratories’ Androgel, a billion-dollar selling testosterone gel used by millions of American men struggling with the symptoms of growing older that are associated with low testosterone, such as poor sex drive, weight gain and fatigue.

Androgel is one of a growing number of prescription gels, patches and injections aimed at boosting the male hormone that begins to decline after about age 40. Drugmakers and some doctors claim testosterone therapy can reverse some of the signs of aging — even though the safety and effectiveness of such treatments is unclear.

Low testosterone is the latest example of a oncenatural part of getting old that has become a target for medical treatment. Bladder problems, brittle bones and hot flashes have followed a similar path: from inconvenient facts of life, to ailments that can be treated with drugs. The rise of such therapies is being fueled by both demographics and industry marketing.

Baby boomers are living longer and looking for ways to deal with the infirmities of old age: Life expectancy in the U.S. today is 78 years, up from 69 years a half-century ago. And companies have stepped up their marketing to the older crowd: Spending on print and television ads promoting testosterone by firms like Abbott and Eli Lilly has risen more than 170 percent in the last three years to more than $14 million in 2011, according to advertising tracker Kantar Media.

“People are living longer and want to be more active,” says Dr. Spyros Mezitis, a hormone specialist at Lenox Hill Hospital in New York. “They no longer consider that because they’re older they shouldn’t have sexual intercourse.”

Former marathon runner Damon Lease, 50, had been complaining of low energy and depression, for which his doctor prescribed a combination of four psychiatric drugs. But since he started taking twice-a-week testosterone injections in May, he says he’s been able to stop taking two of the medications and hopes to eliminate them completely. He says he has more energy, improved mood and concentration.

“I spent 27 years running long distances, I like biking, I like hiking, and I guess every guy wants to have an active sex life … I want to keep doing those things as long as I can,” says Lease, who works as a software company executive. “I feel 20 years younger.”

Despite its rising popularity, testosterone therapy is not completely new. Testosterone injections were long used for men with hypogonadism, a disorder defined by low testosterone caused by injury or infection to the reproductive or hormonal organs.

But the latest marketing push by drugmakers is for easy-to-use gels and patches that are aimed at a much broader population of otherwise healthy older men with low testosterone, or androgen deficiency. The condition is associated with a broad range of unpleasant symptoms ranging from insomnia to depression to erectile dysfunction. Drug companies peg this group at about 15 million American men, though federal scientists do not use such estimates.

Watson Pharmaceuticals now markets its Androderm patch, which slowly releases testosterone into the bloodstream. Abbott has its gel that can be applied to the shoulders and arms. And Eli Lilly’s Axiron is an underarm gel that rolls on like deodorant. Androderm, launched last year, had $87 million in sales, and Axiron, which was launched in 2010, had sales of $48 million last year.

“All of a sudden you’ve got these big players with a lot of money using consumer directed marketing to change the landscape,” said Dr. Natan Bar-Chama, a male reproductive specialist at Mount Sinai Hospital in New York. “They see the potential, they see the market growth annually and it’s very impressive.”

But government researchers worry that medical treatments have gotten ahead of the science.

Male testosterone is mainly produced in the testes and affects muscle mass, sperm production and various sexual characteristics. The hormone can easily be checked with a blood test, but doctors can’t agree on what constitutes a low reading in older men. Typical testosterone levels for younger men range between 300 and 1,000 nanograms per deciliter, but once levels begin dropping there is little consensus on what makes a “normal number.”

Some doctors believe testosterone levels below 300 lead to sexual dysfunction in older men, but the rule does not cover all cases. A 2010 study by researchers at the University of Manchester and other European institutions found that 25 percent of men with testosterone levels above that threshold had the same sexual problems used to diagnose low testosterone.