Texas is first of a tough stretch for UK

Stoops, team still have work to do 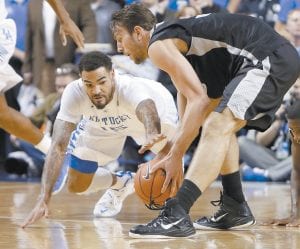 Kentucky’s Willie Cauley-Stein, left, and Providence’s Carson Desrosiers went after a loose ball during the first half of Kentucky’s sixth win Sunday in Lexington. Providence Coach Coach Ed Cooley said after the game that Cauley- Stein is a one man wrecking crew. (AP Photo/James Crisp)

First it was No. 5 Kansas on a neutral court that was supposed to put at least a scare into UK. Didn’t happen. Then it was the undefeated Providence College Friars, recent conquerors of Florida State and Notre Dame, that were supposed to give UK the shock treatment. The Friars did put up a gallant effort for the first 25 to 30 minutes, but it wasn’t going any deeper in the friendly confines of Rupp Arena with the depth and defensively abilities on this UK team. Final score: UK 58, Providence College 38.

It is very difficult to win a college basketball game when you can’t average a point a minute. UK has given up 45 points or less now in five of its first seven games.

Now December has kicked in and the big bad boys from Texas come to town carrying an undefeated record and No. 6 ranking. Every weekend in December, starting with Texas this Friday, will provide UK with a quality NCAA tournament-type opponent. After Texas comes North Carolina in Rupp Arena on December 13, then the following Saturday in Chicago on December 20, UK is matched up with UCLA.

After Christmas, if Santa doesn’t throw any ugly snowballs at UK, the Cats have a date with their instate rivals the Louisville Cardinals down in the KFC Yum! Center on December 27.

Sandwiched between the Texas and North Carolina games are a couple of pigeons to pluck out of the sky in Eastern Kentucky University and Columbia, two Division 1 opponents that shouldn’t take too much preparation time away from the players as they wind down the semester and work their way through exam week.

Note to NCAA: Unlike North Carolina, the UK players do take and have to pass exams in all their classes or they suffer academic consequences.

When your archrival hand delivers you a 3- 0 advantage in turnovers the first three quarters, with two of them resulting in touchdowns, and you put 40 points on the board yourself you would think you would get a victory.

Except there is one fly in the ointment.

Only Kentucky football can make a third- team quarterback look like an All-American.

They did just that when Kyle Bolin, a red-shirt freshman from Lexington Catholic, came off the Louisville bench and replaced the Cards’ starting QB Reggie Bonnafon, who had been the second-string quarterback himself. Bolin entered the game early in the second quarter. UK had dominated Louisville on both sides of the ball until that point and led the Cards 13-0. In his first series, Bolin was faced with a crucial third-down play around his own 22- yard line with seven yards to go. Instead of UK blitzing the young quarterback and forcing him into a possible mistake, it chose to go soft and let him make his own. It didn’t happen and he completed a 15-yard downand out pattern for a first down, which put some juice in his arm and confidence in his head.

The rest is history. He went on to complete 21 out of 31 attempts for 381 yards and three touchdowns. His only mistake was actually a receiver running the wrong route that resulted a “pick six” interception for the Cats.

Now the losing streak is at six and continues on into 2015. Another fall has come and gone and another losing season has followed for Kentucky football. At the beginning of the season many would have gladly taken five wins and moved on to 2015. But when those five wins all come in the first half and you end the season on a six-game losing streak, it gives you the feeling those five wins were a classic case of “fool’s gold” since three were against weak nonconference teams, one was against a now 6–6 South Carolina team that went 3–5 its last eight games, and two of those three wins were against Furman & South Alabama. UK’s fifth win came against a Vanderbilt team that went winless in SEC play.

In the meantime, while we work our way through anther winter, the $110 million renovation of Commonwealth Stadium moves forward and the UK athletic administration keeps pumping Big Blue Nation full of hope and promise that UK football is on the cusp of being a consistent winner in the SEC. First up, Mark Stoops must hire a new offensive coordinator to replace Neal Brown, who has moved on to Troy State for his first opportunity at being a head coach.

In my opinion, whoever came up with the brainstorm idea of selling 2015 football season tickets for the newly renovated stadium back in October should be the person getting a raise, not a coach who ended the season on a six-game losing streak. However, I still think Mark Stoops was a solid hire for UK football. But let the man earn his keep for a couple years before you start giving him raises — two now in the last eight months.